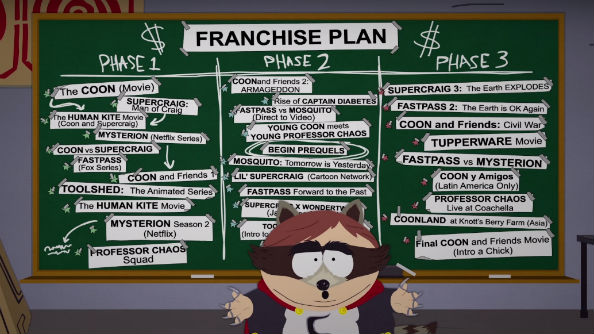 Riffing on the multitude of superhero movies and franchises appears to be the grand joke lying behind the forthcoming South Park: the Fractured but Whole. A glut of information about the game has been revealed at Ubisoft’s E3 2016 conference, including gameplay details, what the story will (loosely) be about and of a release date.

The game is slated for release on December 6, just in time for the Christmas crush of games. If you pre-order the game now, you’ll also get the Stick of Truth thrown in for free – that goes for Steam, PS4 and Xbox one. Check out the trailer below to see exactly how much they’ll be using Marvel as the butt of their jokes.

Space and Time are also key to the new South Park game: space because characters can now move between layers, and time because you can rip the fabric of time by farting. Obviously. For a more in depth look at the game, with Matt Stone and Trey Parker there for commentary, watch the full South Park showcase below.