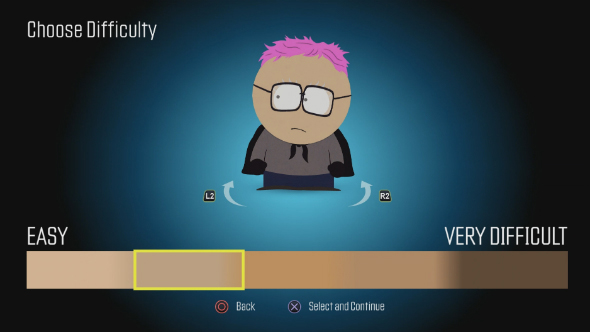 The creators of South Park have never been afraid to joke about some serious topics throughout its decades-long runtime. Up next? Racial inequality addressed through The Fractured But Whole’s difficulty slider. The easiest option sets your character as white, while more difficult settings are represented by darker skin tones.

From farts to yaoi art, here’s everything we know about South Park: The Fractured But Whole.

Cartman quips that this “this doesn’t affect combat. Just every other aspect of your whole life.” Eurogamer report that this isn’t just a goof in character creation, either. You get less money in the game with a darker shade of skin, and characters will refer to you differently throughout – we can’t imagine it’s with positive words, either.

The other interesting bit is that you’ve now got a gender selection, despite playing the same character from the original game, who was always referred to as a boy. Pick a girl this time around and you’ll be asked whether you’re cisgender or transgender, which builds into a smart little retcon of the previous game’s events.

We got some time with the Fractured But Whole, and reckon it’s an improved take on the RPG formula that Stick of Truth brewed up. Naturally, your enjoyment of the package will hinge on how the TV show’s humour holds up for you. South Park will forever remain South Park.