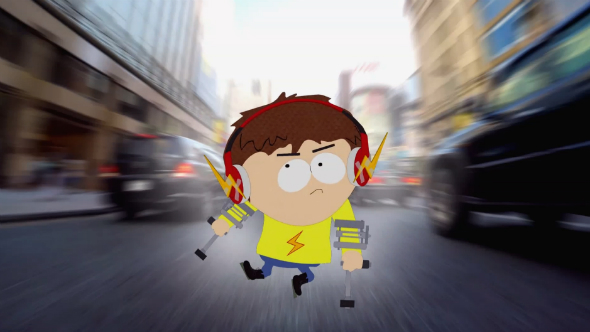 Just after the details? Here’s everything we know about South Park: The Fractured But Whole’s release date, characters, and classes.

South Park: The Fractured But Whole throws a lot at the wall when it comes to making you laugh – much like the first game – but where it really stands apart from that first foray into fully-fledged RPG territory is in how much more fun it is to play.

That’s down to a number of significant systemic overhauls. The glacial turn-based battling has received three marked improvements: a grid that lets you shift your characters around each stage; a massive reduction in the frequency and importance of quick time events; and an expanded buddy system that lets you take three superhero comrades into battle with you at the same time. What that means is there a lot more decisions for you to make, and that in itself leads to more dynamic fights that don’t grow stale after the first couple of turns. 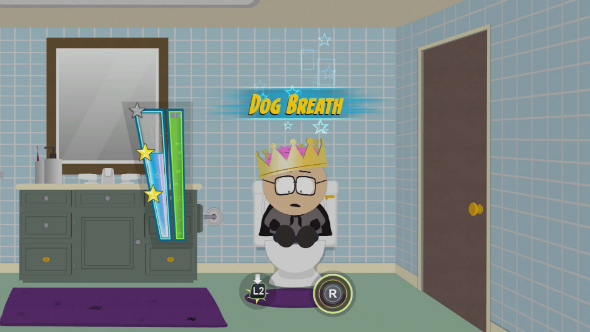 More buddies also means more combat options to experiment with early in the game. Where The Stick of Truth had you cycling between the same three attack types until you’d plugged a few hours into its campaign, The Fractured But Whole presents you with 4v4 battles in timely fashion, and simply grows from there. A quick dive into the Allies app on my character’s phone – which serves as a wondrously simple and functional guise for a menu – reveals nearly ten slots for additional characters I can swap into my party. With each buddy bringing three abilities and an ultimate move to the mix, that’s a refreshing amount of choice going into new skirmishes.

Buddies aren’t just on the battlefield to add to your damage output, either, and there’s a great deal more nuance to each ally than first meets the eye. Every attack has a very specific range and area of effect that often makes choosing between them a dilemma of serious tactical importance. On the more basic end of the spectrum are attacks that deal damage to the first enemy in the same row as you, and some buddies like Super Craig (literally Craig, but with an ‘S’ stuck to his jumper) are defined by having such direct and simple attacks. On the opposite end of the spectrum, you’ll find buddies like Fastpass (mild-mannered Jimmy Valmer made over as a The Flash-inspired speedster) who can teleport around the grid, gain invisibility after a basic strike, or attack anyone in a two-tile radius.

Kryptonite is another factor to take into consideration when choosing which allies to bring into battle with you. This mechanic is introduced in a fight with a group of Raisins waitresses – if you’re unfamiliar, think Hooters, but with children – who are able to repeatedly charm Mosquito (Clyde with a vuvuzela strapped to his face), setting him against you for the duration of the brawl. For other buddies, that Kryptonite might point to a faction like the Crab People, Sixth Graders, Old People, Vampires, Ninjas, or Chaos Kids. You even have to pick one for your character, The New Kid. 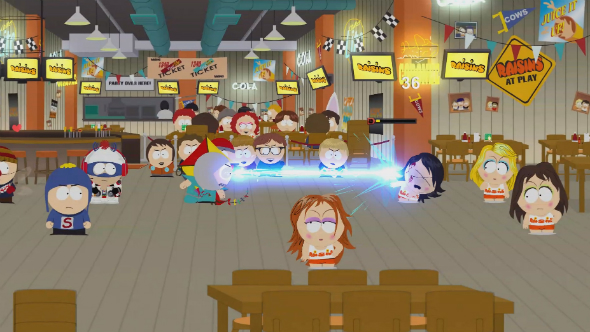 New developers Ubisoft San Francisco aren’t replacing the first game’s combat systems, they’re refining what they had, and fleshing them out with more build and party options – The Fractured But Whole might have blockbuster superhero movies in its sights, but it is twice the RPG Obsidian’s fantasy-inspired predecessor was. There are more classes, loadout options, modifiers, stats, and status effects to pore over this time around, which is all welcome news provided the difficulty amps up considerably after the game’s opening few missions. Three hours in and my only deaths came as a result of a failed cutscene QTE and some overambitious exploration. Nobody’s expecting Dark Souls, but all those extra build options and tactical decisions will count for nought if you sense they’re not making a difference on your party’s survivability.

Where the game does crunch to a halt is when it tries to seamlessly mesh humour, fighting, and narrative. A scene in which I’m attacked by a pair of paedophilic priests is the example I’m using for this point, so bear with.

A short cutscene plays when I enter a dark room in Father Maxi’s Church: there’s some spooky voiceover, a mooing alien, and then two priests approach under the pretense that they’re just in your imagination and want to get to know you better. I sit up in my chair, poised for the worst. It happens. A battle grid lights up, mood lighting fades into life, cheesy erotic music starts playing. The first attack, Hug Thy Father, is a telegraphed move, giving me time to move before I’m caught in the Father’s supposedly harmful clutches. The next attack is called Mutual Flagellation – alarm bells ring – the second Father moves, turns, and painstakingly eases a thread of rosary-cum-anal beads from beneath his cassock before flogging himself with it. I’m stunned now, sat mouth agape, feverishly scanning the faces of those around me to see if anyone else has reached this point yet. It’s another telegraphed attack, so I obligingly shift out of the way and strike from range. The next attack is also Mutual Flagellation, as is the next one, then another Hug Thy Father, and then a final string of Mutual Flagellations before I’m able to finish them off. Poor choice of words, I know. 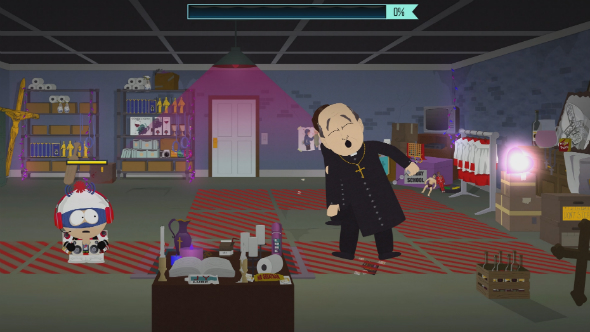 For a moment, The Fractured But Whole had me: uncomfortable, a little bit disgusted, but generally very happy to be there. However, shock humour only works on impact, so by the fifth time the animation plays out my patience is wearing thin. The bulk of the narrative-focused battles in the game’s opening also restrict what buddies you can bring into fights, often pitting you against a few enemies without any support. These clashes are sufficiently scripted to ensure an easy victory, provided you don’t continually skip your turn, but only having a single character to control is not a lot of fun.

These niggles don’t last long, however, because the jokes in The Fractured But Whole come so thick, fast, and close to the bone that the longest you’ll go without at least a titter is under a minute. I’m happy to say there are guffaws too, and chortles, not to mention the odd bray, even a giggle or two. Not everything in The Fractured But Whole will elicit a laugh, but there’s enough stuffed into every scene that plenty is guaranteed to land. That’s the main reason so many people enjoyed the first game and those people will have just as much fun digging through Mrs. Cartman’s drawers this time around as they did in the first game. Every joke and opportunity for humour has been rethought to make certain that South Park and its many homes and stores feels fresh. 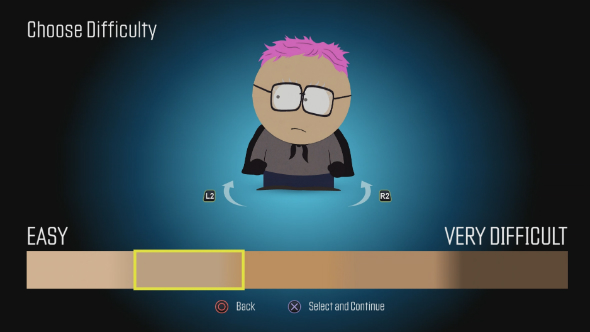 It’s hard to tell exactly where the line will be drawn when it comes to humour, but I feel the first three hours has given me a reliable idea of what to expect from the full game. Granted, that’s an eclectic range, encompassing everything from gross-out fart jokes to a difficulty slider where pale skin colour is easy, and dark skin is hard – apparently this doesn’t affect combat, just every other aspect of your entire life.

As with the first game, The Fractured But Whole struggles to transition between open-world RPG and linear TV show. But these moments are few and far between, and they’re nearly always bookended by a solid joke. Its gameplay mechanics are the highlight, and while they’re still trapped in the realm of emulation and parody, they add enough depth and flexibility to keep battles interesting, and hopefully there’s enough challenge later on in the game to warrant more strategic planning and optimised loadouts.