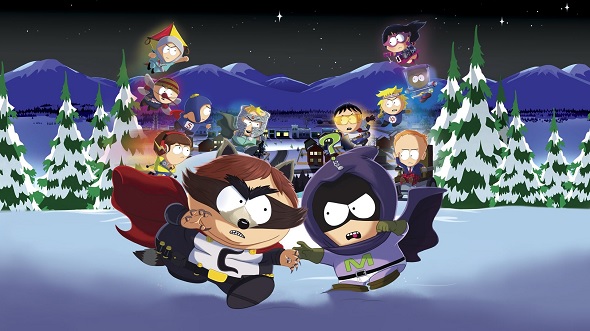 Before the first bottom burp had even been recorded, Ubisoft had their work cut out with any sequel to the well-received South Park: The Stick of Truth. First, they were without developers Obsidian – a bad start in any RPG player’s spellbook. Second – and just like the TV show – they would be confined to the same setting. It is a South Park game; how could it be set anywhere else? Last, and, most importantly, they could no longer use the nostalgia built up over 17 seasons of the show quite like they had the freedom to in the series’ first foray into videogames. That currency was spent.

Fancy picking up South Park: The Fractured But Whole? Here is the lowdown on its gameplay, classes, and system requirements.

They might attempt to make up for this by delivering enough fart jokes to make the game a veritable dutch oven from start to finish – trying to outdo the toilet humour to its detriment. But loyalists should not fear: South Park: The Fractured But Whole leaves its predecessor far behind.

The sequel sees our favourite potty-mouthed fourth-graders bin wizards, wargs, and powerful artefacts (that look suspiciously like your normal everyday twig) in favour of a new superhero playground pursuit. So, to start out, as with any superhero, you are going to need a backstory.

Despite your heroic exploits in The Stick of Truth, you remain the mute ‘New Kid’, but your hard-earned status has been swiftly forgotten. In this brave new world of capes and crusaders, Lord Douchebag is nothing. Now you must work your way up the hierarchy of new superhero franchise, ‘Coon and friends’, who share a mutual hatred with rival franchise ‘The Freedom Pals’. At the centre of this inter-hero civil war is your mission: find a missing cat, Scrambles. 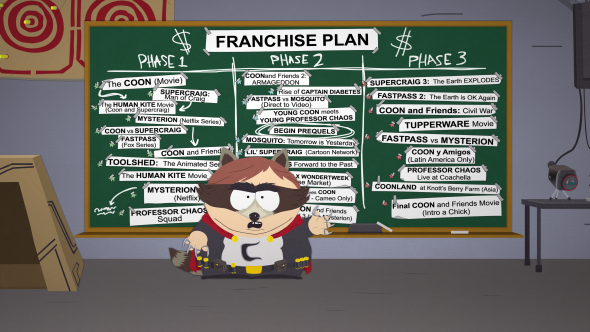 It is this most quotidian of MacGuffins that, predictably, engulfs the entirety of South Park in a cloud of oddly egg-flavoured intrigue. South Park is as sordidly recognisable as ever as you explore its crime-ridden underbelly, but enough is done to expand the setting in all the right places to make it feel distinct. But it is on the battlefield where things have really changed.

Combat is the strongest tool in The Fractured But Whole’s utility belt. Gone are the staid, repetitive combat encounters and unreliable rhythm systems of The Stick of Truth. Instead, The Fractured But Whole features much deeper, grid-based theatres of war inspired by XCOM and Fire Emblem. Movement adds another layer of strategy to a rich menu of new RPG systems to transform The Fractured But Whole from a good game into a great one. With myriad classes, turn types, and areas of effect, it is like Tetris meets the JRPG, and it is brilliant.

Each new system is effectively drip-fed so as to feel manageable despite their innate complexity. Artifacts, for instance, are special, craftable items that grant upgrades to increase the potency of the classes within your team and impact stats like ultimate move recovery and damage. They also increase your collective Might that allows you to gauge the missions and enemies you can conceivably handle.

Allies and enemies come in many shapes and sizes, fashioned in typical South Park style: prepare to do your worst against fearsome, snot spewing sixth-graders, nimble Ninjas that summon more of their ilk to overwhelm you, and, er… crab people. One of these enemy types you must choose as your Kryptonite, your Superman-inspired weakness to force you to adapt. All enemy types have their strengths and weaknesses that significantly affect how you will approach your fight strategy. That is where the game’s 13 classes come in.

Each class is satisfyingly distinct: the Speedster calls upon his pace to move around the grid with ease, buzzing around foes to deal light damage or heal allies. The Blaster, on the other hand, keeps their distance as they whittle down enemy health bars, with the Brutalist preferring to get up close and personal. Each has their own lovingly designed ultimate to tip the balance of a fight in your favour but, as thrilling as any class can be, they will get repetitive after 20 or so hours.

Thankfully, then, you are not just able to dual class, but you can mix and match up to four classes at once to keep things fresh throughout. Quadruple-classing means you can choose ultimates and standard powers from three classes at any time – perfect for exploiting enemy weaknesses in a testing fight. By the end, my humble Blaster got to mess around with massive turrets and music so grating it induced an enemy’s rage. Your allies are each variations on these classes, and all unlocked allies and powers can be changed in the much more streamlined, smartphone-style menus. Feeling bored? Change everything in a, well, Flash. The new grid-based system brings with it the freedom for Ubisoft to experiment with ‘Special Objectives’. Simply defeating your assailants forms the bulk of battle types, admittedly, but, in some cases, you need to escape from an invincible boss or group of cantankerous old people. Or you might be forced to ‘unground’ your companions before they can join the scrap if they have fallen foul of their parents. You are kept on your toes at all times, making the tiresome, stationary left-to-right tradeoffs of The Stick of Truth’s battles feel all kinds of archaic.

It is during combat that South Park: The Fractured But Whole showcases Ubisoft’s astonishing attention to detail – with Matt Stone and Trey Parker’s help, of course. When buffing my allies, the almost-defeated grimaces of my ‘fourthie’ colleagues turn to relieved smiles as I hover my cursor over them. Tupperware – Token’s superhero alias who was run over and put back together with bits of Tupperware – in a ‘Grossed Out’ debuff state, throws up within his plastic-encased head. It’s these unique animated quirks that truly bring South Park’s characters to life, encouraging you to try them all.

Recurring jokes from recently-completed side missions regularly return mid-fight, some being too good to spoil. Whilst rewarding, it is also a treat to see your impact on the world integrated dynamically into combat. However, some jests are strung out a little too long.

The game is at its funniest in these kinds of situations. In ‘Raisins’ – a parody of Hooters – you rescue fellow Coon friend Clyde, masquerading as his parasitic hero alias. “Not even citronella can stop me!” is his cry as he swarms over enemies. While South Park might be known for its outrageous, headline-grabbing sense of humour, it tends to be the subtle, missable jokes and references that elicit the chuckles.

Of course, whether you get on with the jokes in South Park: The Fractured But Whole depends on your taste and offence threshold. Unsurprisingly, if you are a long-serving fan of the show you will feel right at home. If you are on the fence or don’t get on with a level of humour that saunters confidently across lines others dare not cross, things get tricky. Jokes are thrown at you in a dizzying barrage, so it is bound to be a hit-and-miss deal to some degree. For me, the majority of jokes did not land. Briefly following Cartman (aka The Coon) provokes a weak jibe at escort missions, for example, which felt contrived and would have been cut with a sharper editor’s pen. Worse are attempts to make light of issues such as misogyny, when you must take prostitutes under your spell by slapping them and turning them against their pimp. And that is before we even get to the farts, which assail the ears (or nose?) at such a rate as to render them almost – gasp – unfunny.

South Park: The Fractured But Whole, outside of combat – enjoys most of its success by putting the seemingly endless stream of superhero movies from DC and Marvel to the satirical sword. Ubisoft, Parker, and Stone have taken this idea and ran with it with aplomb, and nowhere is this better demonstrated than in the game’s magnificent sound design. Even the frequent posterior puffs have their own admirable range.

Each location, from the Peppermint Hippo strip club to an old people’s home features their own stellar musical theme. As you are wandering through South Park, the music swells in such a way as to make you feel like a world-saving Captain America, as opposed to an eight-year-old kid in a poorly stitched-together bug costume.

The Fractured But Whole is a better RPG than Obsidian’s original effort in almost every way: everything you do counts towards increasing the power of your party. It’s hard not to find watching the numbers tick up addictive. That said, multiple sets of collectibles and progress trackers threaten to get a touch out of hand. Perhaps it is a comment on smartphone culture and wearables tracking every moment of our lives, but between the action-packed main missions, it can feel like padding.

Where it does not falter, as with The Stick of Truth, is in how the game nails the spirit of the TV show as if to feel like a feature-length entry into the series. On top of that, the excellent and refreshed combat system and the complex coexistence of new RPG systems mean The Fractured But Whole renders its predecessor entirely forgettable. If it was once The Avengers, now it is Batman vs Superman.

TV show stalwarts should breathe easily and those on the fence about the game’s penchant for outrageous humour to definitely give it a go for the sake of its fantastic gameplay. However, if South Park has never been to your taste, The Fractured But Whole makes no attempt to change that.

And that is our review of South Park: The Fractured But Whole. Let us know what you make of the game in the comments.