A Space Hulk is a mass of lost spaceships, asteroids and wreckage that have fused together to create one planet-sized entanglement of rock and metal. They drift through space forever, warping in and out of locations at random. So vast and enormous are they that they even have their own atmosphere and gravitational pull. In short: they’re the most Warhammer 40K thing imaginable. They also provide a unique setting for a first-person shooter: navigating endless mazes of corridors, traversing ships from different cultures and points of history, constantly fighting against a ceaseless discharge of insectoid aliens called Genestealers.

For more aim-down-sights action, check out the best FPS games on PC.

Playing as a Librarian of the Deathwing, the elite first company of the Dark Angels Space Marine chapter, you’ll lead your squad into this behemoth of debris, seeking out the relics and mysteries of each ship’s creators. Unlike games like Doom or Quake, which inspired large elements of Streum On Studio’s forthcoming tactical FPS, you won’t zip around each corner dealing out damage on an apocalyptic scale and circle-strafing the baddies.

Despite your hulking armour and arsenal of weaponry, you’ll still feel vulnerable, explains Streum On Studios owner Christopher Longuépée. “Sure, you are strong, but in front of you there are really strong and really fast creatures. We wanted there to be attacks from distanced weapons, we wanted Genestealers coming in front of you and clawing at you, and we wanted bigger Genestealers that are really kind of tanks that come along and try to crush you. There are a lot of different AI behaviours.”

One of those AI behaviours is what Streum On Studio call the Hive Mind, and it’s rather simple it theory – alert one Genestealer and the whole disgusting, snarling lot of them will know about the small squad of soldiers wandering through their hunting grounds. That horde won’t descend on the player in manageable waves in wide open areas. It’ll wait, bide its time and amass in terrifying numbers. “Every Genestealer knows where you are, and we want them to act cooperatively to crush you and your squad – to really cooperate with all the different kinds of [Genestealer] and work together to surprise you,” says Longuépée. 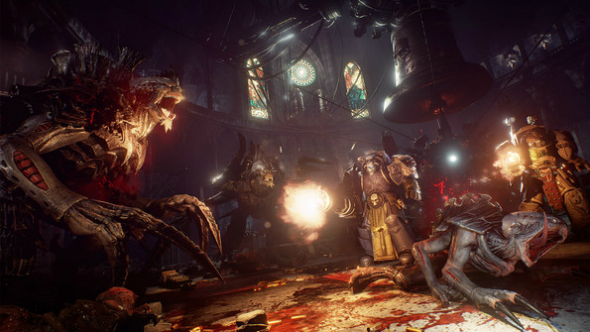 As the infamous Aliens: Colonial Marines attests to, horde AI is vital for creating a convincing enemy; getting it wrong results in a frustrating and repetitive shooter. Space Hulk: Deathwing’s Genestealers have a combination of Unreal Engine 4’s AI behaviour trees and what Longuépée calls “homebrewed technologies” to thank for their apparent competence in eating Space Marine faces. There are also a number of Genestealer variants that players will come up against, such as the Hybrid, which can use weapons like assault rifles and rocket launchers, and the Broodlord, a massive monstrosity of teeth and nails that operates as a miniboss in certain levels. These additions are designed to help break up gameplay and make every encounter dynamic and hard to prepare for.

Complication is the opposite of what Streum On Studios have aimed for with the AI design of the player’s Deathwing squadmates, insists Longuépée. “The main thing we didn’t want is for the AI to be frustrating for the player, because we hate it when you are playing a game and you get a ‘game over’ because you are blocked off by an AI teammate – it’s really a big challenge. We are really proud of it, because we have found that it’s good to play with them. We wanted them to be as much of a support role as possible, to let them just help the player. So if you want to just have them in support, you say to them, ‘OK, follow me’ and you let them just do their job and help you. If you want a more micromanagement style of play, you can give them orders like ‘open this door’, ‘cover this area’, etc. So you can go into micromanagement, but it is not a pure tactics type of game.” 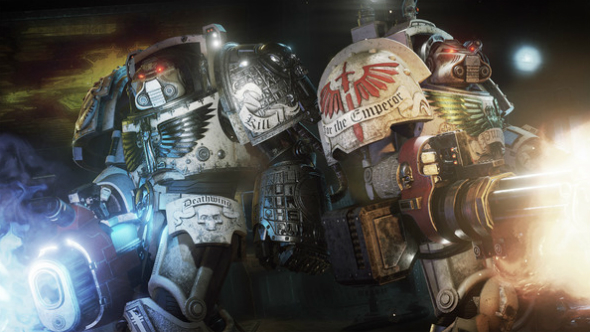 Part of that decision has to do with how frantic combat can get in Space Hulk: Deathwing. The last thing you need when a tide of Genestealers comes crashing down on you is to have to tell your squad where to stand and what to do. This is compounded by the need to use melee weapons in most fights, says Longuépée. “Melee combat is really fast paced. You are against monsters that are much quicker than you, so you have to react and to imagine what they will do.”

Making the player feel vulnerable even when they’re wearing Tactical Dreadnought Armour – Warhammer 40K’s most powerful and prestigious suit of power armour – is no mean feat either. Movement is slow and damage is localised – imagine stalking through an alien-infested ship at walking pace, knowing that if you take a lot of damage to your arm, you’ll be unable to wield your weapon.

But Longuépée says the environment is one of the game’s core mechanics for making the player feel equal parts exposed and claustrophobic. “We played a lot with the environment to make the player feel crushed. It’s one of the main mechanics we used for the game. What is really interesting about the Space Hulk is that it’s a mix between different ships from different times, all with different elements – so we can play with ships coming from different eras and we can mix them with some asteroids or we can have some mechanical parts in there because they are a more industrial ship. We want to let the player feel that in the Warhammer universe everything is strong. Sure, you are strong, but so is everything around you,” explains Longuépée. 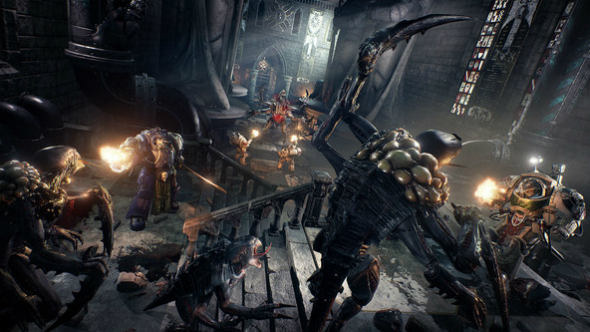 “We loved the old EA game from 1994 – it was really impressive for us as teenagers, it really inspired us and that’s why we want to make a first-person shooter. I think there is not another good FPS in the warhammer universe that is so big, there are a lot of games but very few first-person shooters.”

Longuépée isn’t wrong – of the over twenty videogames that have been set in the Warhammer 40K universe only two have been first-person shooters, and of them only 1994’s Space Hulk: Vengeance of the Blood Angels was worth playing. That’s 22 years since genre and franchise previously aligned, which places an enormous amount of pressure on Streum On Studios to get things right this time around.