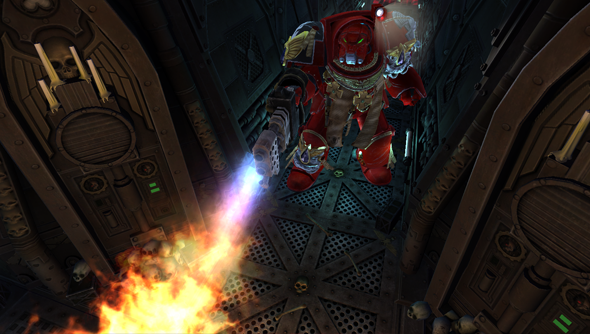 Space Hulk, the Games Workshop board game conversion, is now out. Pre-release copies to review weren’t available, so we’re working a bit on the hop, but Julian and I have both played it a little bit, and wanted to give you some of our early thoughts.

Frankly, it’s not great. Not even good.

Tim: So, quick introduction to my perspective. I’m an interested observer in Games Workshop stuff, who loved XCom. I played Space Hulk a few times when I was quite young, but now I am an old and fading man and have long since forgotten the rules. Jules, have you ever played Space Hulk?

Jules: I’d not played the tabletop version of Space Hulk but it’s basically Warhammer 40K does Aliens. There are a few heavily armed marines fighting loads of quick, bitey aliens.

Tim: Let me try and sum it up as best I can. It seems fairly faithful to the boardgame, as I remember it. The space-hulks are thin collections of corridors that are navigated by men the size of a family car. Because of their narrowness, there’s a simultaneous sense of both claustrophobia and OH FFS when you realise you’ve sent a big man with a flamethrower down the front of a column but what you really meant to do was put the man with the long range gun up front because he can actually shoot.

Meanwhile, Genestealers, represented by blips of theoretical alien mass until they’re actually up in your face and biting, are throwing themselves into your guns until a bolter jams. And then you die.

Jules: That’s it in a nutshell. You’re always trying to keep some space between you and the genestealers. So far, is that all faithful to the board game?

Tim: Yup. So, the mechanics are built around creating tension, and when you play the boardgame, that tension comes from dice rolls. However… this version of the game seems to just completely lack any sense of tension. Mostly, I think, it’s just frustrating. It might be that we’ve been spoilt by XCOM – where you have a very good sense of why a dice roll succeeds or fails. But I think that in Space Hulk I really don’t feel like I’ve got any control over why my Terminators succeed or fail. I don’t have a problem with randomness in videogames when handled carefully. But in Space Hulk, success and failure in both the missions and the multiplayer feels entirely arbitrary. And that’s annoying.

Jules: I’m not a fan of chance in my games. I repeated one of the campaign missions a few times over and it’s frustrating that on one playthrough a marine could hold a corridor unaided while on the next he missed every shot and was killed by a single genestealer. Also, Terminators are meant to be the pride of the emperor. It took one of them three attempts to punch a door open with a power fist. A power fist.

Another problem with the game is the artwork. The levels are all made of the same tiled corridor sections. With the game as light on content as it is, Full Control could really have worked to give the different sections of the ship you fight through a bit more character. Alien showed you can do a hulking great industrial ship and still have variety in its decor.

This is supposed to be the escape pod control room:

It just comes across as lazy.

It’s also an incredibly slow game. In Warhammer lore the Terminators are basically walking tanks. That’s conveyed in Space Hulk by having them walk at a glacial pace. The marine turn takes a silly amount of time because you’re watching what looks like an arthritic rhino try and waddle down a corridor.

Tim: Julian’s not wrong about the slowness of the Terminators. At one point, I did find myself wondering why they didn’t equip these humans with 40K equivalent of mobility scooters. They could wear them as roller skates.

More seriously, I was actually a bit surprised with how little game there is here. There’s a brief 3 mission tutorial, and then 12 full campaign missions. The campaign missions take about an hour to complete, but you will replay them repeatedly – they’re all hard as nails and have tight mission objectives. When it comes to multiplayer, you have the pick of those missions again, with one player playing as the Genestealers, and the other as the Terminators.

In the multiplayer game we just finished, you played as the Genestealers. How was it?

Jules: It was the first time I’d played as them and the rules were slightly different. They’ve fewer combat options than the marines. They can only melee. But I like how deadly they are in close quarters. Plus, they’re basically invisible until I reveal them or if I move them to close to the marines. It was mostly the mission we picked but it was very easy for me to win.

Whereas the marines have a set number of units on the board, I get new genestealer swarms at the start of each turn. By turn five I had the whole of the lower deck swarming with aliens. I just needed to wait by the ladders for your marines to walk over and then I could jump you.

I’m curious, could you see where my brood were?

Tim: I could, as soon as they moved. It’s worth talking a bit about the multiplayer. You can play online or via Hotseat. I can’t imagine anyone will play Hotseat, but online is a good option. It uses an account system, rather than Steam, and is the equivalent of a play-by-mail thing. It works, and we didn’t come across any problems.

And that’s about all I have to say about the game itself.

Honestly, though, I just wouldn’t bother with Space Hulk. If you want something good to play like it, play XCom or Frozen Synapse. If you’ve already played them both, start a new game on a higher difficulty. Or try Leviathan Warships, which is a complete larf.