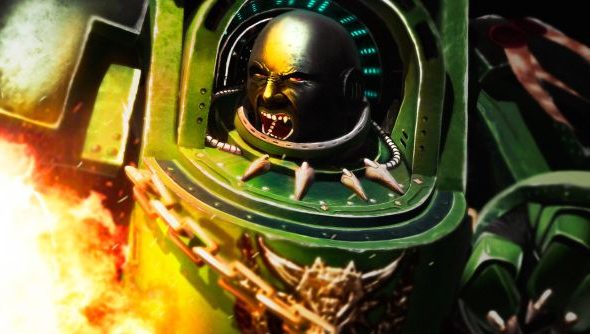 For last week’s battle report, me and Jules booted up ye olde Space Hulk – the rather slavish board game adaptation released two summers ago to a lukewarm reception. Since then, however, indie devs Full Control have relit the flamers for Ascension – a half-sequel that bends the same engine to more videogamey ends.

People seem to like it. Perhaps they’ll like 40 more missions and a new chapter of space marines to puppeteer in the Salamanders expansion.

The expansion is now kicking about Space Hulk: Ascension’s Steam page, as well it might. It runs on Windows, Mac and Linux.

The Salamanders aren’t a chapter I remember from my White Dwarf days, but they sound like an entertaining bunch – armed with flamethrowers and ‘pyromantic’ psychic spells.

“Players are going to love the new options afforded to them by the Salamanders chapter,” said Full Control chap Thomas Hentschel Lund. “Their lethal Heavy Flamers and resistance to fire are a deadly combination for the Genestealers to contend with!”

Not too deadly though, I’m sure – the genestealers are never more than a lunge away from a power-armoured breakfast.

The new stuff is an even split between story and ‘flash’ missions, and should have you stomping around the Virtue of Hatred in pursuit of pages from the Tome of Fire for about 30 hours. Expect new environmental challenges, plus the same XCOM-ish percentages and RPG elements of vanilla Ascension. Did any of you lot have fun with those?