Until recently, I had never experienced gaming in virtual reality, which is surprising given how intolerably bleak our poxy reality is – who doesn’t want to escape? Guys? However, at Oculus’s 2017 Unwrapped event in November, something stood out that finally convinced me to travel to the other side. Called Space Junkies, it was described as a “jetpack-fuelled shooter in microgravity where you can nav, grab, and shoot in outer space.” Obviously, I was in.

What an introduction to this alternative reality Space Junkies is. While the influence of Quake, Doom, and Unreal Tournament forms the ventricles of its beating heart, with you zooming about its orbital arenas in 1v1 and 2v2 modes, the inherent immersiveness of VR removes the crutches players often rely on.

I quickly learn that fumbling with the Oculus Touch’s buttons, while producer Adrian Lacey patiently introduces the game’s controls to me, is not abetted by looking down. My hands have become neon spaceman gloves; fingers flicking madly like a Bond supervillain. I may have dabbled in arena shooters before, but here I am compelled to disregard all I know about interacting with the virtual: VR is forcing me to reconnect with physical movement.

“In VR, I am giving you all this new stuff, then we blind you from looking at your hands or the controls,” Lacey explains. “But once you get past that, you realise you are just aiming where you are looking and just grabbing as you would in real life. It is funny how the normal things are the hardest to relearn.”

It is not just players who have to adjust, however, as VR is still posing new challenges for developers, too. For Ubisoft Montpellier the answer is Brigitte, an engine built specifically for the pre-production and production of VR games. 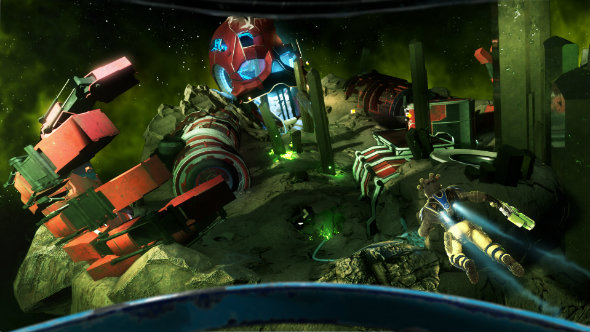 “We found straight away that editing on a 2D screen gave you no sense of scale,” Lacey says. “In VR, if there is cover, I have to be able to physically look around it.”

It is this kind of situation that renders Brigitte essential in creating Space Junkies’s intricate maps, allowing Lacey and the team to edit in virtual reality: “VR changes the way you think about level design, so we decided early on to make it in VR and use tools that will allow us to consistently work and create in that virtual space.”

But Lacey, gently teaching me the ropes in-game with supportive thumbs ups and dabs, makes a crucial misjudgement: he tells me to look up. 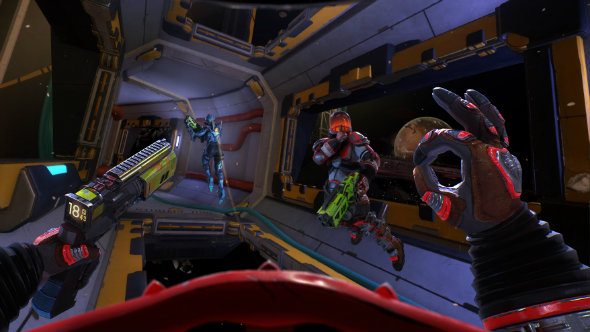 I oblige. Then I look down. Oh dear. Overcome by the sudden realisation that I am not, in fact, sitting in a comfortable chair minded by the kind folk of Ubisoft Montpellier, but instead suspended in the deep black vacuum of space by my jetpack, I am immediately disarmed by the physical dissonance of the situation. Thankfully, I avoid recycling my lunchtime canapes, and continue to acclimatise.

Once more accustomed to manoeuvring through space, flying towards weapons and physically reaching out to use them, I am launched into an intergalactic deathmatch. Under fire, I take little comfort in Lacey’s well-meaning assurance that it usually takes new players two or three rounds to get their bearings.

But a few deaths later, something clicks. Steadily unlearning years of existing game knowledge, I start to rely on instinct. Taking the Liquidator shotgun out of its holster and reloading it properly with my arms, and peering my head to aim down gun sights feels uncanny. As does brandishing what can only be described as a lightsaber and a sci-fi shield, waving my arms about madly – and likely looking a pleb in the process. 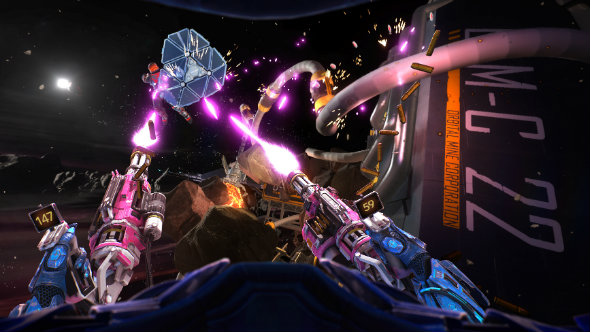 Dialled in to this new way of thinking, I start getting kills above and below me – an important feat given the game’s spherical maps. I am not just dual-wielding and unleashing the chambers of Space Junkies’s guns – which have considerable oomph – in-game; I am doing it for real. Well, erm, pretending to do it for real. You know what I mean. At any rate, it feels special, even natural.

This sensation would not have been possible without the experience the team had built up, which came from some surprising places. “We did a lot of stuff on the Wii, and some of us come from the team that worked on Just Dance,” Lacey tells me.

“We have been working with motion controllers for a long time, so we learned a lot about body expression and movement. We wanted full VR embodiment so there is no animation, it is just one-to-one.”

Since this is my first sojourn into virtual reality, I cannot comment on the accuracy of the other experiences available. However, you can feel the years of development experience poured into Space Junkies’ motion tracking: in the absence of any discernable lag, my unfortunate space avatar feels like a digital extension of myself. I struggle not to flinch when a barrage of shots comes careening my way. While such immersion can be unnerving at first, the sudden realisation of what this platform can do is like glass shattering. Admittedly, that might have been me dropping the headset.

Despite big publishers like Bethesda and Ubisoft throwing their weight behind VR, challenges still remain for the platform. A high financial barrier to entry and a small install base continue to suppress the hype that surrounds VR. All Ubisoft Montpellier can do for now is craft promising experiences that make the most of this exciting new reality, and hope that the technology eventually finds the mass market its creators so often talk about. Space Junkies may struggle to find the audience it deserves, then, but it certainly presents a convincing argument for the future of VR.

Space Junkies be will be coming to both Oculus Rift and HTC Vive in early 2018. Let us know what you make of the game in the comments below.