We’ve all wondered what a hybrid of Quake III Arena and Portal would look like, right? Well, Splitgate is here to make that fever dream a reality. Developer 1047 Games’ fast-paced free-to-play FPS game sees you navigate the map and compete for kills via the canny placement of portals. Use them to cross chasms, ambush enemies, and instantly warp from one location to the next. Prepare your spatial awareness for one intense workout.

You can battle up to ten opponents in online multiplayer, or face off against bots of varying difficulty levels offline. Close-quarters combat this might be, but stages feel pleasantly expansive and allow plenty of room for manoeuvre when it comes to exploiting angles – whether they involve folded space or not. The more you play, the more you can customise your avatar, unlocking new skins for your guns, armour, and even portals.

So, if you want all the awesome gear your body can carry, or you just want a leg up on the competition, we’ve put together this Splitgate tips guide to help you hit the ground running. Below, you’ll find a few essential tips covering everything you need to know, including the best way to place portals, and some cool tricks you can do with them. Let’s get started!

How to place your portals

Using portals to connect areas is key to Splitgate: Arena Warfare – if you’ve played Valve’s Portal, you’ll already have a good idea of how it works. You have the ability to place two portals at once: one purple, one gold. To fire the former, press Q. To fire the latter, it’s E. You can’t set up your portals just anywhere, however – they must be placed on holographic wall panels. Oh, and it’s worth noting that any portals placed by your teammates will appear blue to you, while enemies’ will be red.

The distance between the two panels you place your own portals on doesn’t matter. You can, for instance, shoot a portal at a wall on one side of the map, then set up another one at the opposite end and cross the length of it in an instant. Or you might decide to fire one portal into a wall and one at the ceiling, allowing you to literally get the drop on your opponents. 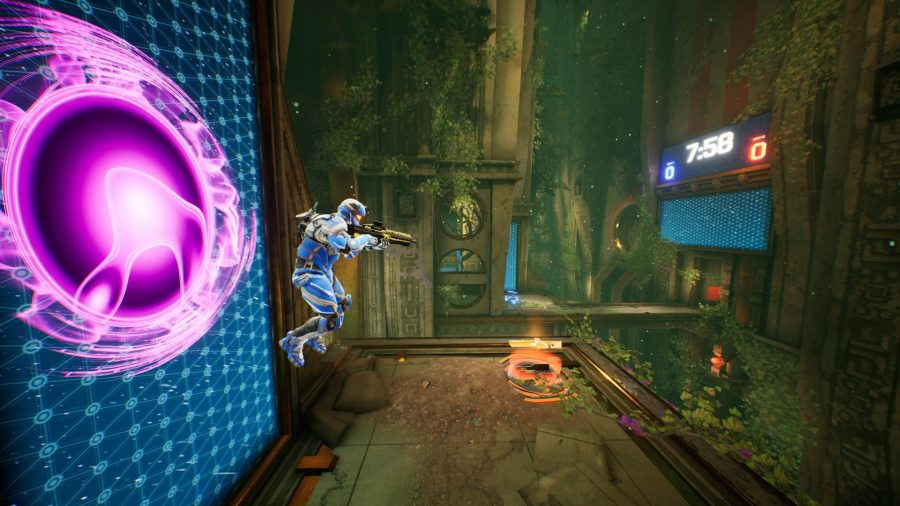 Be sneaky with portals

Don’t think of portals only as navigation tunnels, but rather as potential traps you can set for your opponents. One way to do this is to set up a portal under someone’s feet and let them drop straight through it – never gets old, that. You could also set up a portal and make sure an enemy sees you go through it. Chances are they’ll follow you, at which point you simply wait for them to pop out and then start shooting.

Get a little practice under your belt and you can consider shooting through portals at the hapless individuals on the other side. In this sense, portals are like security cameras, helping you monitor the battlefield like a sneaky voyeur. Set one up somewhere with good sightlines and get eyes on the world. When you aim at an enemy, your crosshair changes colour, so if this happens while you’re looking at a portal, you know someone is on the other side.

Oh, and remember you can close your own portals, too. For this, you have to press X or Z. It’s useful to set up a getaway portal in a safe location, and if you get into a spot of trouble, you can portal back there and close the path behind you. 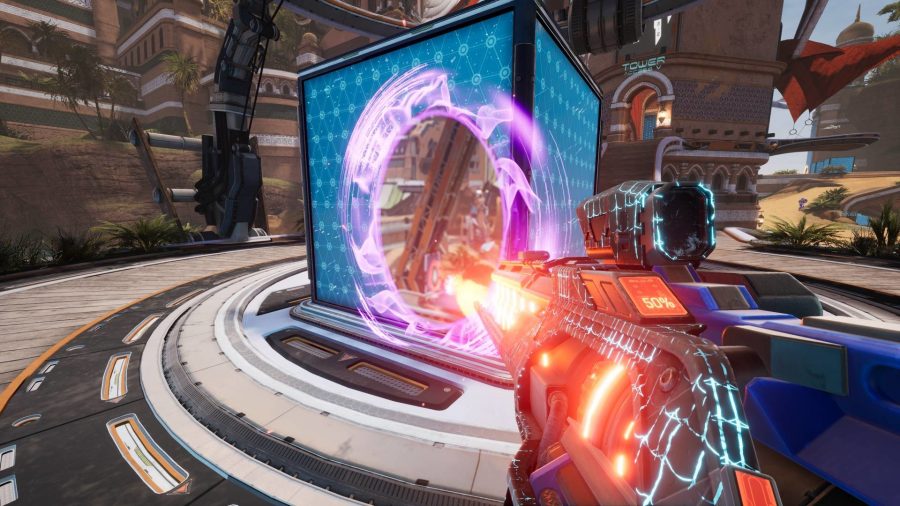 It’s also worth bearing in mind that you can pull off some advanced movement using portals. Just like in Portal itself, it’s possible to put down a portal, stand halfway inside it, then shoot a portal at a new location and walk back through the portal. This is called pixel walking, or triple portaling. Using this trick, you can move around the map rapidly and get the drop on your foes.

You don’t even have to use a portal in order for it to be useful. You can block enemies’ portal placements by putting one down yourself, or set up a portal to flank your foe but refrain from going through it – instead, when they turn to look at the portal, you can catch them out.

We recommend playing Splitgate races to get a feel for each map’s layout. Once you’re more familiar with a map, you’ll find it easier to gain awareness of how you – and your enemies – can move around the terrain. 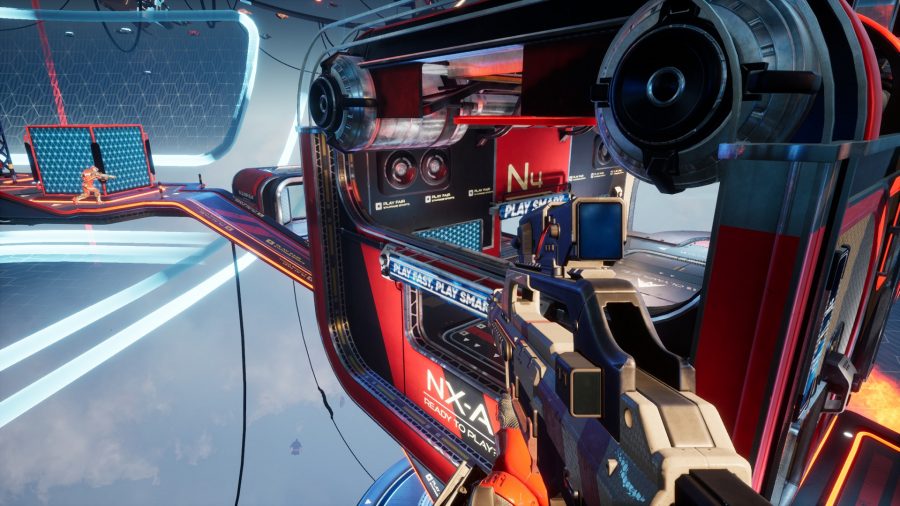 To promote fairness, you start each and every match of Splitgate with the exact same weapons as everyone else. Unlike other games in which you set your loadout before a match, here you begin on an even playing field. You can start dramatically, err, unevening that playing field by snagging power weapons, however. One such tool is the Sniper – just Sniper, no surnames here – which is particularly potent in Splitgate.

For starters, headshots are an instant kill, so you can dispatch foes rapidly with good enough aim. But what if your marksmanship is lacking? Fear not: enemies in Splitgate are highlighted in red when you spot them, so tracking them is a whole lot easier than in other games. This helps massively when you’re trying to keep a bead on targets through your scope. You might not be a sniper master in other shooters, but here it definitely pays to pick it up. 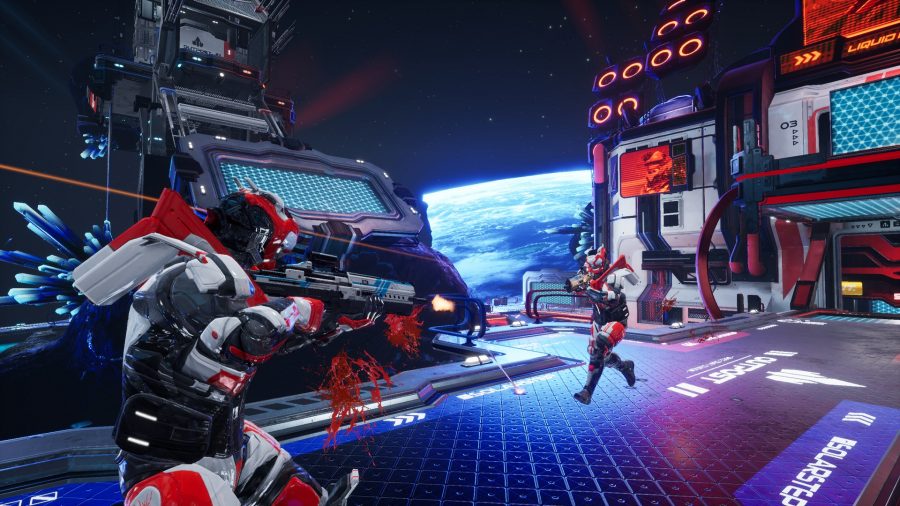 In most games, you throw grenades at people to blow them up. You take aim, cook the timer, then fling the explosive to get a merciless kill. Not so here. In Splitgate, grenades are actually EMPs. Rather than damage enemies, they’re designed to destroy the opposition’s portals. This makes them versatile tools in your arsenal.

For instance, if an enemy has set up a quick escape route you can launch an EMP at it and ruin their day. Or, conversely, safeguard yourself by dropping an EMP at the base of an enemy portal you’ve just passed through to eliminate potential tails – particularly useful given that you might not know where the portal leads!

So there you have it, five top tips for dominating the battlefield in Splitgate. Be safe, and try not to get too queasy while flinging yourself around the level. Best of luck out there, soldier.