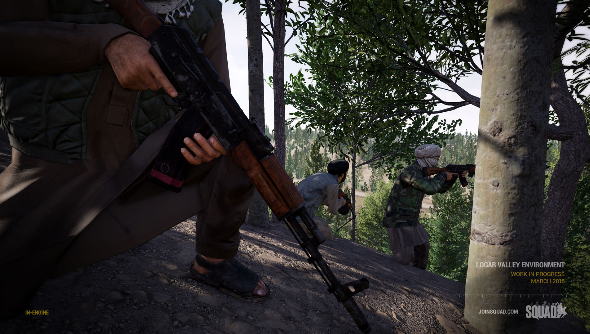 A new massive-scale first-person shooter has appeared on Steam Greenlight that is the work of a team of ex-Battlefield 2 modders best known for Project Reality. Squad is a 50v50 tactical shooter that looks to take the Battlefield formula and redefine it in a distinctly more ARMA-like manner.

Built in Unreal Engine 4, the tactical shooter is set in environments based on real world locations mapped out with Geographic Information Systems satellite data. 9 man squads will hopefully eliminate lone-wolf style play, and the diversity of roles should encourage working together to make a team that can deal with all situations.

Talking of Unreal 4, the team have found it’s been an excellent tool to build Squad with.

Alongside the usual infantry and vehicle combat you’d expect from a game from Battlefield modders, Squad will also feature base-building, supply routes, and a realistic medic system. Also given the history of the team, it’s no surprise to see that there will be support for modders and mission designers from launch.

Right now the Sqaud development team have over 21,000 supporters on Greenlight. If you’re interested in the project, it’s soon to start it’s crowdfunding efforts. Players who donate to the crowdfunding will be able to get into the game’s alpha. The team hope to have the game on Steam around the end of the year.