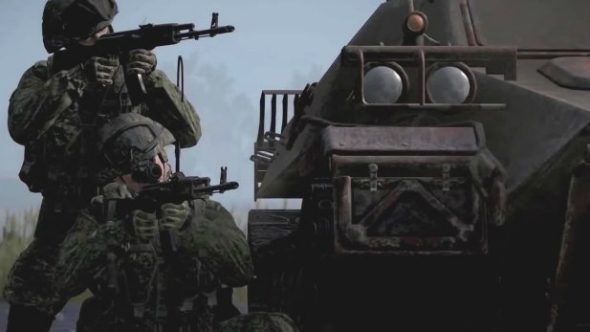 Attention, squaddies! Update Alpha 9 for Squad is now available, as shown off in the trailer above.

Looking for other military or arcade FPSs? Check out this list of PC shooters for a good starting point.

Offworld Industries’ 50v50 military simulator welcomes new vehicles for various factions as well as changes to the Forward Operating Bases and the introduction of a new scoreboard.

In a previous rundown we lined out exactly what players could look forward to, such as the BTR-82A vehicle for the Russians, the BTR-80 and two MTLBs, the BRDM-2 Scout Car for the Insurgents and Militia, and an MTLB as well. The Americans got the Stryker ICV troop carrier to break things up a bit.

The scoreboard itself gets additional details and stats for players, while the FOBs allow for the creation of spawn points and the building of hideouts and bunkers.

If you’re a hardcore Squad player, you can check out the entirety of the changelog for exactly what you can expect from the Alpha 9 update via the official Squad website.

Not interested in reading and want to jump right in and start shooting things? You can purchase Squad right now via Steam Early Access for $39.99/£29.99 if you’re itching to reach in and give it a whirl yourself, especially with all of the new changes available.