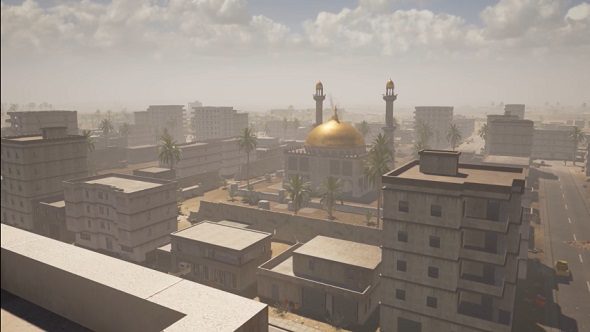 For those who are hesitant about putting their boots on the ground, Offworld Industries are offering a free taster for Squad next weekend. Starting on April 6 and finishing on April 10, Squad will be free to play on Steam, so new privates can test their mettle as a soldier before signing up to fight.

Here is our comprehensive list of some of the PC’s best FPS games.

As part of this free weekend, Offworld Industries are also adding in a redux of a fan favourite map from Project Reality. Coming out on April 5, the Al Basrah map will add Squad’s first real instance of urban combat into the map rotation. With an expanded play area, this map has players fighting in the streets of a Middle Eastern city, complete with multistory buildings and a mosque with a gleaming golden dome smack bang in the city centre.

With the Insurgent faction starting in the city, the US Forces must travel in from the airfield at the northeast corner of the map, choosing whether to clear out the nearby village first or heading straight into the thick of it via the main road.

The addition of Al Basrah should shake up the usual dominance of the US Forces, as Insurgent players can set up RPG nests from any of the highrises dotting the city streets. Expected fierce and protracted fighting once the US armoured convoy rolls into town.

Squad will also be on sale for 50% off during this free weekend, making it the best time for new players to enlist. Usually on sale for $39.99/£29.99, it’s quite the tidy saving for soldiers strapped for cash.