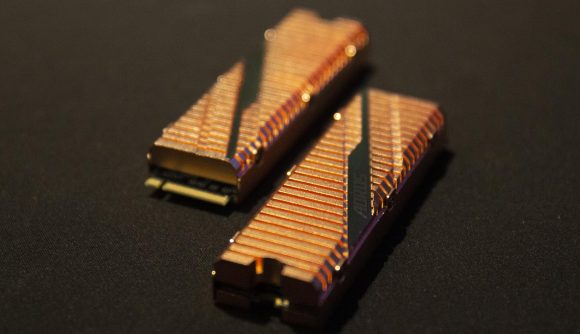 We’ve already seen a few NVMe SSDs with support for PCIe 4.0, but they’ve taken nowhere near the full advantage of the doubled bandwidth of the fourth generation. This looks like it’s about to change, however, after a number of drives were announced during CES – some of which will likely make our list for the best SSD for gaming with faster loading and boot times.

The first super speedy drive comes from MSI’s keynote, with read and write speeds of 7,000MB/s and 6,900MB/s respectively, and capacities ranging up to a whopping 4TB. It’s got its own heatsink, which isn’t a new concept but should ensure thermal throttling is minimised during long periods of drive access, keeping it as close to that rated 7,000MB/s read speed as possible.

Kingston also announced its Ghost Tree SSD, with a similar target of 7,000MB/s sequential read and write speeds. No heatsink shown here, but a lot of the best gaming motherboards come armed with their own M.2 heatsinks, so it shouldn’t be too much of a problem.

We might not know the pricing of these SSDs just yet, but don’t think they’ll come cheap. Samsung’s 980 Pro SSD is already on the market with 6,900MB/s sequential read speeds and will set you back around £130 / $140 for a 500GB capacity, so we can only imagine what a 4TB drive at the same speeds will cost.

If you’re interested in picking up a PCIe 4.0 SSD, be mindful of compatibility. For an Intel build, you’ll need to be using the upcoming Rocket Lake-S processors, as Intel has only just added PCIe 4.0 support with its 11th generation, lagging behind team red, which has been enjoying the benefits for over a year.