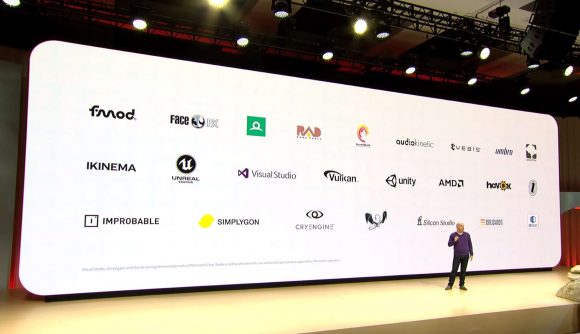 Google Stadia will receive 10 timed-exclusives by July 2020, Google tells press. The search engine company fell short of naming any titles specifically, but it would appear it’s resolutely chasing tried and tested console tactics to get users through the door and onto its AMD-powered servers.

The cloud gaming service will be privy to at least 120 games during 2020, it claims, which would drastically expand Stadia’s existing library. Currently only available to Pro subscribers – those that pre-ordered Founder’s or Premiere Edition kit – Google will soon, if all goes to plan, launch its free tier with access to 1080p cloud gaming. No exact date has been set for the change, although users’ ongoing three-month Stadia Pro subscriptions are coming to an end.

“Looking at our upcoming lineup,” Google says (via Eurogamer), “we are tracking more than 120 games coming to Stadia in 2020, and are targeting more than 10 games in the first half of this year alone that will be only available on Stadia when they launch.”

Google’s homegrown studio, Stadia Games and Entertainment, is working on first-party exclusives for the streaming platform. So far no games have been confirmed, but we could see further action from the team in 2020 to kick off Google’s ambition.

These titles will be exclusive to Stadia, Phil Harrison told PCGamesN prior to Stadia’s launch.

“We don’t require that games be exclusive to our platform,” Harrison says, “so some games will appear on multiple platforms, as is expected. The games that we build ourselves with Stadia Games and Entertainment will only be available on our platform.”