Update, August 25, 2017: We typed up the update below, and 60 seconds later the stream started. So, consider this your update to say that the stream has started.

Update, August 25, 2017: Looks like there’s been some snags, the official Star Citizen Gamescom presentation has been delayed with no ETA for its start.

In case you were planning on watching the Star Citizen Gamescom stream and were wondering what’s going on, there’s some issues. Here’s what the team said in Twitch chat. 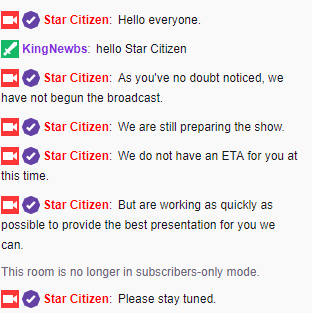 We’ll update once we know what’s going on. For the stream itself, just scroll down a touch.

Original story, August 23, 2017: Not all developers are showing off their big announcements at the start of Gamescom: Cloud Imperium Games, the developers of Star Citizen, are saving it for towards the end, on Friday 25th. They’ve got a presentation at the Gloria Theatre in Cologne, as well as a booth at the actual event.

So, what are they going to be showing? I honestly have no idea, the only tease they’ve given is that they’ll be “showcasing some of what we’ve been working on this year, and delivering some never-seen-before gameplay.” The only further detail I have is that the stream will be at 19:00 UTC/20:00 BST/21:00 CEST/12:00 PT/15:00 ET/05:00 AET. Might want to set your alarm clocks, Australians, or find a way out of work if you’re in America.

The team are also streaming throughout Gamescom, which you can find the times and days for right here. For where to watch it: the stream below is the place to be! If it’s not live, that means you’ve probably missed whatever the day’s stream held. If you’re at Gamescom, then you can always go to the Star Citizen booth to get some special collectibles. Like a real life fetch quest.