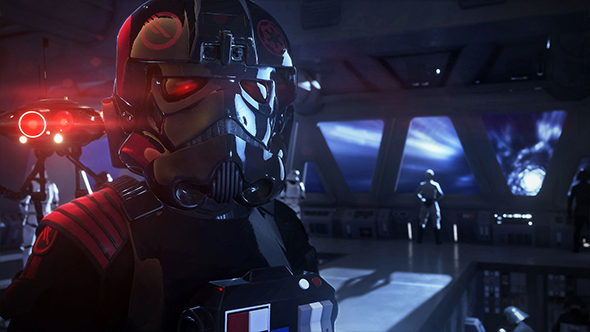 Do I really need to write another introductory paragraph on the Battlefront II loot box controversy? If you’re reading this, you’ve probably already seen one of a billion different pieces on the storm around this game, which hasn’t died down even after EA removed microtransaction purchases from the title.

If you need a refresher, here’s everything wrong with the Battlefront II progression system.

Gamers haven’t calmed down partly because EA have every intention of returning microtransactions into the game – we just don’t yet know what form they’ll take. That’s something EA CFO Blake Jorgensen reaffirmed at today’s Credit Suisse 21st Annual Technology, Media & Telecom Conference, according to GamesIndustry.biz.

“We’re not giving up on the notion of MTX,” says Jorgensen. “We’re learning and listening to the community in terms of how best to roll that out in the future, and there’s more to come as we learn more. But I would say we’re certainly not changing our strategy.”

A big part of why Battlefront II has taken an even greater beating than other microtransaction-driven games is because its items affect gameplay. Titles like Overwatch have seen far more success with cosmetic items that affect the look of your characters. But Jorgensen says that wouldn’t work for Star Wars.

“If you did a bunch of cosmetic things, you might start to violate the canon. Darth Vader in white probably doesn’t make sense, versus in black. Not to mention you probably don’t want Darth Vader in pink. No offense to pink, but I don’t think that’s right in the canon.”

Regardless of how you feel about pink Darth Vader, it’s easy to imagine this as more of a Lucasfilm directive than one that comes from EA or DICE, especially considering a cosmetic-driven mode is reported to have been cut from the game at the behest of the Star Wars brandmasters. A dataminer going by Uninspired Zebra has even dug up a hidden character customisation menu in the game.

CNBC report that EA’s stock value has been affected by the controversy, with an 8.5% month-to-date drop compared to the S&P 500’s 2% gain. In the same period, Take-Two and Activision Blizzard – both companies with big microtransaction revenues – grew 5% and 0.7% respectively. The drop in EA’s share values translates to a $3 billion loss, but that number seems more significant than it actually is according to analyst Daniel Ahmad.

That’s not to say the loss in value has no effect, but whether EA’s direction in the future will change depends on far more than a single bad day on Wall Street.