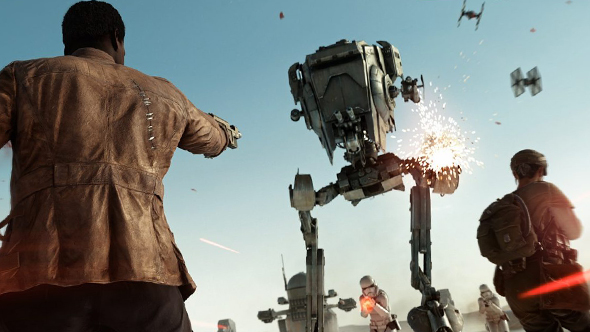 While it’s buried under a mountain of loot box-related controversy, there is in fact a game underneath Battlefront II’s questionable progression system, and it’s one based on one of the world’s biggest film franchises. You might’ve heard that there’s a certain new entry in that series hitting theaters soon, and the game will be getting a selection of new content in promotion of The Last Jedi.

Get lost in plenty of galaxies far, far away with the best space games on PC.

That all releases today, leading off with a new Galactic Assault map on the planet Crait and a new Starfighter Assault map set above D’Qar. You’ll be able to pilot Tallie Lintra’s RZ-A2 A-Wing now (we’ll apparently find out who that is in the movie), and Poe Dameron’s T-70 X-Wing is going to enjoy a fresh upgrade with a new ability.

Finn and Captain Phasma will join the fight on the ground, and both characters will be immediately unlocked without the need to grind out credits if you log in during December’s Last Jedi game season. Also free is the story DLC titled Resurrection, which follows a much older Iden Versio after the conclusion of the main campaign.

Despite EA temporarily pulling microtransactions from the game – and suggesting they might not come back at all – controversy around Battlefront II has significantly affected the response to it, and some analysts are projecting the game to fall 2.5 million units short of its earlier estimated sales.