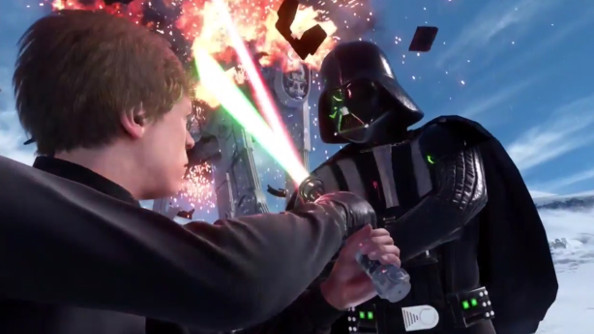 After a huge backlash over the weekend, EA have cut the cost of unlocking heroes in Star Wars: Battlefront II’s multiplayer by about 75%. They’ve also cut the credits awarded for completing its single-player campaign by the same amount – you’ll now get 5,000 rather than 20,000.

Look at all these Battlefront II heroes you’ll no longer have to play 40 hours to unlock.

These credits seem to be intended for you to unlock the campaign’s protagonist Iden Versio in multiplayer. As the cheapest hero, she used to cost 20,000, and now costs 5,000, so you can unlock her immediately under either system.

This change isn’t an unreasonable one – it just brings the post-campaign reward in line with the new hero prices. Reducing it to 5,000 means you can’t immediately unlock more expensive heroes, so you’ll have to grind for them as intended, but hopefully that grind should feel a lot fairer now.

Update, November 13:EA have made an about face on the most controversial portion of their Battlefront II monetization plans, reducing the cost of in-game heroes by 75%.

EA have announced a massive reduction in cost for Battlefront II heroes. Luke Skywalker and Darth Vader will be reduced from 60,000 to 15,000 credits each, while Emperor Palpatine, Chewbacca, and Leia Organa will be going from 40,000 to 10,000, and the campaign’s original character Iden Versio will be going from 20,000 to 5,000 credits.

These represent a significant reduction in in-game credit costs. One player made waves when they calculated it would take 40 hours to unlock one of the top-tier heroes, though this admittedly did not take into account bonus credits earned from the in-game achievement system. For anecdotal reference, after playing the full 10 hour trial on Origin Access – rather poorly, I’ll add – I’d earned roughly 20,000 credits from both matches and achievements.

In the official announcement, DICE executive producerJohn Wasilczyk says “change will be a constant” for the game. “As one example, today we’re making a substantial change based on what we’ve seen during the Play First trial. There’s been a lot of discussion around the amount of in-game credits (and time) it takes to unlock some of our heroes, especially Luke Skywalker and Darth Vader. Unlocking a hero is a great accomplishment in the game, something we want players to have fun earning. We used data from the beta to help set those levels, but it’s clear that more changes were needed.”

“We know some of our most passionate fans, including those in our subreddit, have voiced their opinions, and we hear you. We’re making the changes to the credit levels for unlocking heroes and we’re going to keep making changes to improve the game experience over time. We welcome the conversation.”

There do not appear to be any new changes to the loot box system, which offers upgrades for all character classes including many that can offer advantages in-game. EA have already made one set of alterations to this system, and it seems they’re confident that the matchmaking system will keep players with different amounts of gear separated, since that gear determines the rank of individual classes.

Original Story, November 13: Heroes in Star Wars: Battlefront II must be unlocked before you can play them. This is done with credits, which can be earned through gameplay and are now awarded based on time played, rather than points earned in-game (a system whichhas its own problems). Based on this, a Redditor calculated the average minutes needed to unlock a single hero. The result: 40 hours. EA’s response defending the idea is now the most downvoted in Reddit history.

Responding to a separate thread complaining about the discovery, EA’s community team say“the intent is to provide players with a sense of pride and accomplishment for unlocking different heroes.” The prices were based on data from the open beta. EA say they’re looking at average credits earned per player “on a daily basis, and we’ll be making constant adjustments to ensure that players have challenges that are compelling, rewarding, and of course attainable via gameplay.”

At time of writing, the response has more than 128,000 downvotes (though also, bizarrely, seven months of Reddit gold, so it’s not all bad). That’s the most of any post in Reddit history – second place is this comment on me_irl, with a paltry 24,200.

Other responses, which you can browse on the community team’s Reddit profile, suggest that some of the relevant values may change. One says “are [sic] team is now looking at this again to see how we can improve.” Hopefully the credit award rate will become more generous or hero prices will be reduced, but there’s no way this isn’t a bruising incident for EA, especially after the initial wave of loot box controversy over Battlefront II’s Star Cards.

Here’s the post by TheHotterPotato which first crunched the numbers. The sums seem to tally, but it’s worth noting thatan EA developer has saidthe post is “highly inaccurate” and “doesn’t take a lot of things into account.”

Many fans theorise that the punishing grind is intended to nudge players into spending real money on loot boxes, which can grant Star Cards, which can be scrapped for credits. Here’s a video byYouTuber XfactorGaming, in which heearns 18,700 credits from 85 crates bought during the game’s EA access trial.