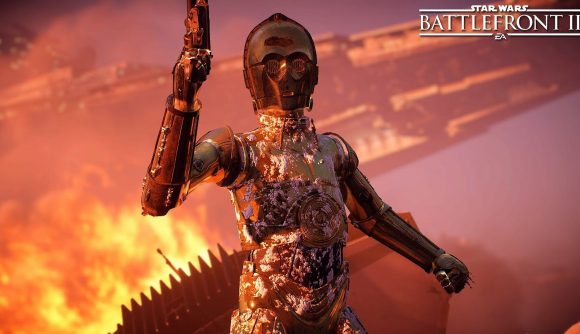 Star Wars’ protocol droids have been serving humans for decades. Now, they’re fighting back. Or, at least, they are in Battlefront 2. A Reddit user recorded a supposedly passive NPC turning into a deadly blaster-wielding immortal.

The interaction is probably just a glitch, especially when you consider that it’s shouting Rebel soldier voice lines. Still, I like to imagine a situation where, conscious of droids’ abuse by players, a hero at DICE flips the switch. Given the cruel electrocution of the humanoid robot it would be particularly poetic.

User Scorpion5437 says he was playing through the campaign’s second mission, The Dauntless, when the droid pulled out a blaster and let loose. This appears to be a replay with some perks enabled, so it’s possible an odd interaction there is what caused the bug. A door he ran through should have closed, but didn’t, so that probably contributed. Either way, Scorpion’s TL50 had little effect and he says the NPC eventually killed him.

“I killed everyone in front of me while scanning with DIO and the protocol droid came up as an assault class,” Scorpion explains.

“I ran further than I should have because a door should have closed, blocking my route to the droid, but it didn’t. There has always been a protocol droid at the end of the corridor, but it has never shot me down before. I think that was part of the glitch.”

The Battlefront II subreddit has some wild conspiracies, including that it’s a reference from the comics to a killer version of C3PO, Triple-Zero, owned by Darth Vader. Others are jokingly saying it’s confirmation that more droids are coming to multiplayer or wishing for protocol skins.

I’m playing campaign and a protocol droid got a gun after I shocked it and proceeded to eventually kill me. Glitches are weird but hilarious from StarWarsBattlefront

Though this case is probably unintentional, developers have made NPCs aggressive on purpose before. In recent times, the biggest case is probably Eve Online. Last year, players of the space sandbox noticed that largely passive characters known as drifters were turning on them. What followed was a large-scale invasion which blacked out local chat and made some players very angry. I highly doubt that will happen in Star Wars Battlefront 2, but a man can dream.