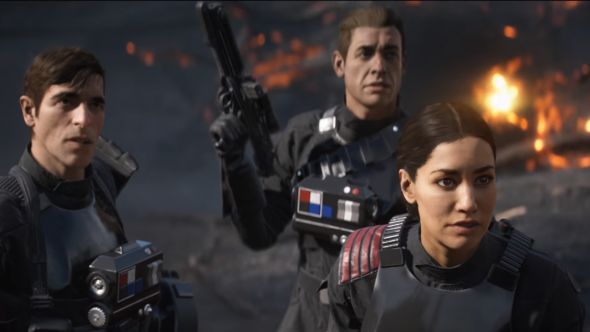 EA have released a campaign trailer for Star Wars Battlefront II. Ahead of the game’s release next month, the video offers some more details on the game’s single-player campaign.

The campaign features Iden Versio, commander of Inferno Squad – the Empire’s special forces. It’s all pretty intense – the trailer starts with Iden jettisoning herself into space in order to escape a group of rebels who have taken her captive. In the wake of the destruction of the second Death Star, Idean and the Inferno Squad are tasked with eradicating the rebels, in something of a ‘last hurrah’ from the Emperor.

The trailer moves from Endor, to Coruscant, to Naboo, featuring battles from locations across all three Star Wars trilogies, both on the ground and in space. There’ll be plenty of familiar faces in the campaign, Luke and Leia both feature, as does Maz Kanata from The Force Awakens.

You can check out the full trailer above. Star Wars Battlefront II releases November 17.