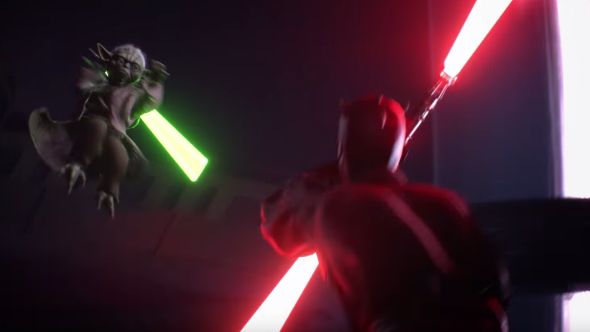 Unlocking all 23 currently-available Star Wars Battlefront 2 heroes takes about 24 hours of play. According to this Reddit thread, it should take the “average player” about a day of continuous play to unlock all nine vehicles and 14 characters.

Quite what constitutes average in this case is unclear, but the suggestion seems to be that if you play recently at a decent level, and take advantage of daily rewards, you should be able to unlock all the heroes in about 24 hours. Presumably, that time-frame includes the time it takes to complete the campaign, which rewards you with enough credits to unlock its protagonist, Iden Versio, for competitive play. It also seems that this figure is based on the current progression system, after in-game item values were scaled back by 75% last week.

It’s worth remembering that EA have turned off the game’s microtransactions, so players can’t buy in-game items anymore. However, it’s still rumoured that unlocking everything will take you a solid six months of play-time, and that’s without the addition of any extra content – a 3D model for General Grievous was found in the game files recently, suggesting he could be making his way to the game soon.

Original story, November 15:Unlocking everything in Star Wars Battlefront 2 will either take you a lot of time or cost you an awful lot of money. Gaining access to every single card, class and hero would take thousands of hours or thousands of dollars, on top of the cost of the game itself.

According to this post, there are a total of 324 star cards currently available in the game, and to upgrade those you’d need 155,520 crafting parts. Those cards unlock things like soldier classes, vehicles, and iconic Star Wars heroes, but according to some (fairly generous) maths, unlocking everything would require the opening of 3,111 loot crates, which you’d earn through 4,528 hours of gameplay.

If, for some reason, you don’t have six solid months to spend in the game, then feel free to turn to a more financial route to success. Opening those 3,000 loot crates would need 248,880 crystals (Battlefront II’s in-game currency). If you purchase those crystals in $100 bundles, your total cost would be $2,100 (plus whatever you spent on the game itself, obviously).

If those numbers seem high, bear in mind that they don’t paint the whole picture. This maths assumes that you already own all the game’s star cards and have upgraded them to level three, ignoring the time or cost of getting them to that level. It also assumes you’re getting the average reward out of every loot crate, and that you’re buying everything in the most efficient way possible.

These numbers come after EA scaled back the cost of Star Wars Battlefront II’s heroes by 75% over the weekend, following significant online backlash, which means that the initial grind could have been as much as four times higher than it currently is. However, when the DLC inevitably drops, that figure is set to rise yet again.