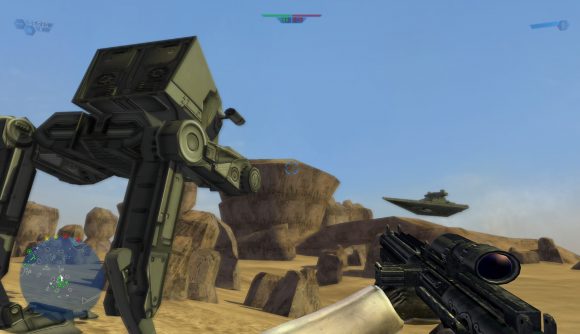 It’s almost May 4, and with it a Star Wars pun that has somehow morphed into a soft holiday and regular marketing opportunity. This year, we’ve got an extra surprise – the original, Pandemic-developed Battlefront has been re-released on modern digital platforms, including Steam and GOG.

Back in 2017, the original Battlefront II got a set of updates from GOG that restored the game’s multiplayer features, and those updates went to both the GOG and Steam releases. It seems the release of BF1 is a little less substantial, so don’t expect any big changes beyond getting the game easily accessible on modern PCs.

You can get Battlefront for a discounted launch price of $8.49 / £6.11 / €6.96 on your platform of choice. GOG’s also hosting a broader Star Wars sale for the next week, where you can get discounts on classics ranging from TIE Fighter and Dark Forces to Episode I: Racer, Knights of the Old Republic, and the Lego Star Wars titles.

Check out the sale page if you want the details.

Read more: Dig up the best old games on PC

The Jedi: Fallen Order release date is coming up quickly, which will be the first story-driven Star Wars game we’ve seen in a lot of years. No game can compete with the force of nostalgia, but at least today your nostalgia is covered, too.