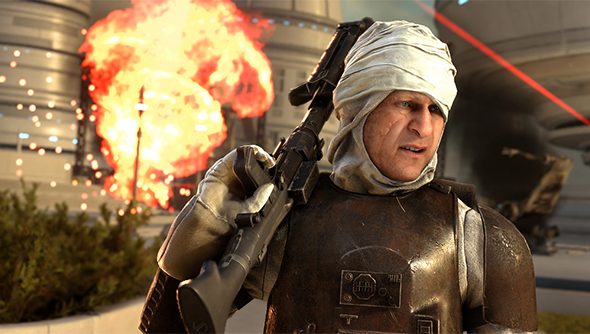 If you’ve already got your sights set on Star Wars Battlefront II, hold your fire. EA hasn’t finished with the first game just yet.

Fancy playing the best FPS of all time? Check out our list of the contenders.

Battlefront, which sold a stack load when it hit the shelves last year, is set to be boosted by a new Bespin expansion pack later this month and, in typical EA fashion, the publisher has put together a little trailer to get you excited.

It’s a fairly awesome trailer, in truth. As its name suggests, the expansion pack includes five new multiplayer maps all set on the cloud city of Bespin, and naturally adds Lando Calrissian into the mix for the first time.

Also on board is bounty hunter Dengar, as well as new vehicles and weapons to take charge of.

Oh, and there’s a new game mode too, dubbed Sabotage. “The Empire has deployed several tractor beams on the surface of Cloud City that prevents Rebel ships from escaping the planet,” says EA of Sabotage. “In order to power the tractor beams, the Empire makes use of Tibanna Gas Generators that draw from the Tibanna Gas native to Bespin.”

It all looks a bit spectacular. Season Pass holders can get their hands on the Bespin expansion pack from June 21. Everyone else can take to its skies two weeks later.