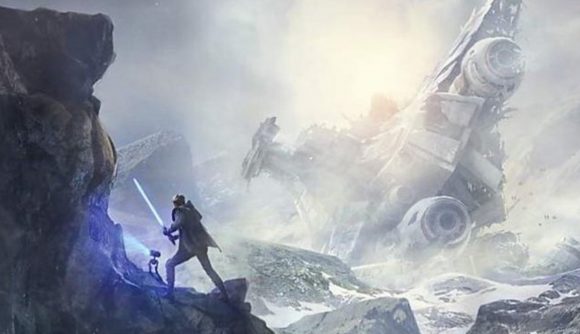 EA’s Star Wars community manager Jay Ingram has been vocal on Twitter following Star Wars Celebration last weekend, where Star Wars Jedi: Fallen Order got its reveal trailer. Ingram confirms that the anticipated saber-swinging action game has “no plans for DLC“, “no season pass,” as well as “no microtransactions. No loot boxes. And no, we won’t be adding them.”

We’ll also see some gameplay in June – which almost certainly means EA Play at E3 – and there will be a degree of cosmetic customisation. This was already confirmed by the deluxe edition and pre-order bonus, which says cosmetics will be available for your droid and lightsaber at least. Ingram says EA is saving further details on cosmetic customisation “for the reveal”, but confirms they will not include an ‘endowment’ slider. Sorry, Conan fans.

Ingram strikes a noticeably contrite tone over the “no microtransactions” tweet from the EA Star Wars account. To some, this tweet came off looking like a selling point, with YouTube pundit Jim Sterling typefying the reaction with these thoughts: “I’m not applauding a company for doing what it was too greedy and blinkered to have done years ago”.

Ingram’s reaction is humble, saying of ‘Angry’ Joe Vargas’s similar view: “he’s understandably sceptical and there’s nothing wrong with that. It’s on us to win back players.”

As an official EA spokesperson, this attitude is surely sanctioned by the company, and reflects CEO Andrew Wilson’s attitude in an email last month: “we have work to do with our games, our player relationships, and our business.” That email followed 350 layoffs and the closure of EA branches in Japan and Russia.

Save a galaxy far, far away: the best Star Wars games on PC

It’s clear that EA is in humble mode, and if indeed Fallen Order does release with none of the monetisation policies or live service experiments for which the publisher has shown such enthusiasm in the past, is preparing to back that attitude with action.

The Star Wars Jedi: Fallen Order release date was just confirmed as November 15. For everything else we know about the game so far, hit that link.