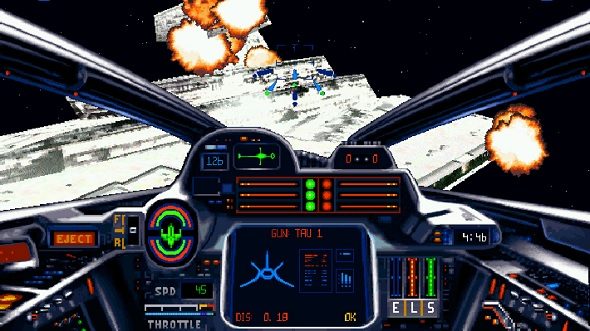 I remember my first time playing it – coincidentally, also 25 years ago. Now I have 25 years more experience. 25 more years of heartbreak, anger, lethargy, and kilograms in my gut – along with a few prequels and a couple of sequels added to the Star Wars canon. Not to mention the addition of Battlefront 2 to wring my hands about.

If you’re after more you should check out the best Star Wars games on PC.

So, with Star Wars and myself now tumbling towards our inevitable ruination, it seems like a good time to revisit the past – when we were young and still had faith in George Lucas.

X-Wing was not the first 3D flight sim out there – that honour probably goes to 1974 Plato game Airfight. But what X-Wing was, was great – like, properStar Wars great. It was made of the stuff that makes you squeal with glee, like when the Ewoks beat the Empire, or Jar Jar Binks dropped one of his ever-popular comedy bombshells into the fray. 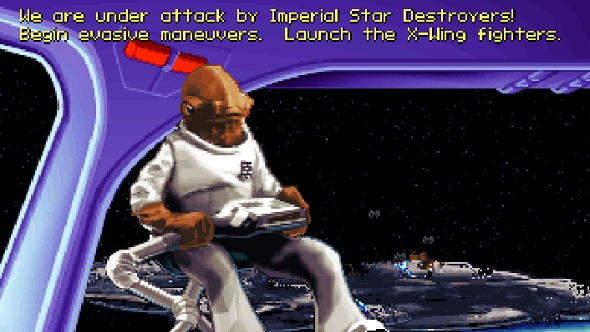 The title belies the full scope of the game, too – you fly X-Wings, sure, but you also fly B-Wings (picture a Volvo with bombs in the boot) and A-Wings (essentially a rocket-powered roller skate held together by little more than hope). You also get to square up to Star Destroyers, named as such despite the fact they have never been seen destroying any stars in any of their on-screen conflicts – look, Star Wars canon works so long as you ask no questions, OK?

Your goal in each level is to swoosh your way around space while battling waves of TIE Fighters, bombers, interceptors, and whatever else the Empire flings from its hangar. This formula has since been repeated ad infinitum, improved upon by newer games – including Battlefront 2 which, to be fair, has some ace space battles. But nothing can take away X-Wing’s accolade: it was the first game to throw a Star Destroyer in your face as if to say ‘nice try mate, but you can’t win’.

But X-Wing’s bravado hasn’t aged well. What struck me most during my return to the game, buoyed by the added benefit of the little I have learned over the past quarter of a century, is that you cannot win. I mean, erm, not literally. You canwin – you canbeat the game, it is just so hard that, unless you enjoy torture and have a lot of spare time, you probably won’t want to bother in these enlightened times. 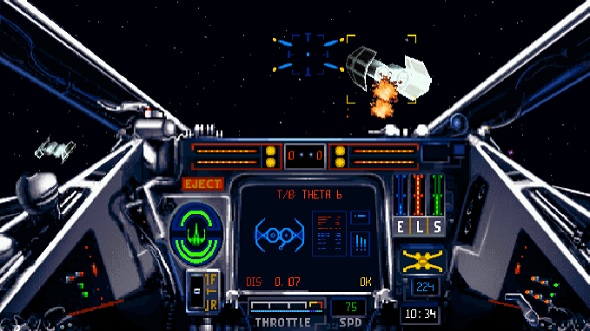 You will have to spend a great deal of time protecting other ships, for a start. Playing as the rebels, it makes sense that you would be on the run, of course, but if you aren’t absolutely on point, your charge will be swiftly destroyed. And while the game was marketed as a sim, combat tends to be wave-based – there’s always one wave too many, just when you realise you are already in trouble. On top of all this, it is difficult to regress back to a time when tutorials weren’t forcibly woven into the main game.

If you are the type of person who pairs their morning cornflakes with broken glass, who thinks that everything should be a challenge, life is pain, and so on, my position may well sound like sacrilege. But I implore you to go back and play X-Wing to see how it holds up today – your next bowl of shard-filled flakes will seem even more palatable. The comforts of modern gaming have softened us all. Today, X-Wing’s difficulty is somewhere closer to ‘being a bastard’ than ‘offering a challenge’.

At the time, I was drawn to X-Wing for the promise of being able to fly around in a simulation of the Star Wars universe. Being a young fool, I expected to be a fully-licensed pilot by the time I had completed the game – a certificate automatically printed out by my PC as the credits rolled. I stuck with the game for that reason, not because it was rewarding, necessarily, and not because I was learning transferable skills. 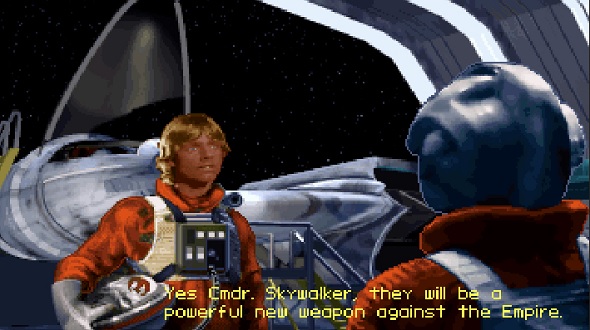 I have been fooled many more times by Star Wars over the past 25 years. Maybe it is due to that bitter history with the series that my time revisiting X-Wing comes hand-in-hand with these revelations – it was the first of many deceptions, I just didn’t know it at the time.

You were amazing to me once, X-Wing, when I was young and knew no better. You even changed my perception of what Star Wars games could do, and what they could be. But now it is hard not to notice the cocktail of ‘protect the idiot’ and ‘kill the unkillable waves’ missions.

Through all of this, however, I cannot shake off my deep-seated admiration for everything X-Wing achieved. It doesn’t matter how frustrating it feels now, I still love this game.

Have you revisited X-Wing recently? Or do you have fond memories of the game the first time around? Let us know in the comments below.