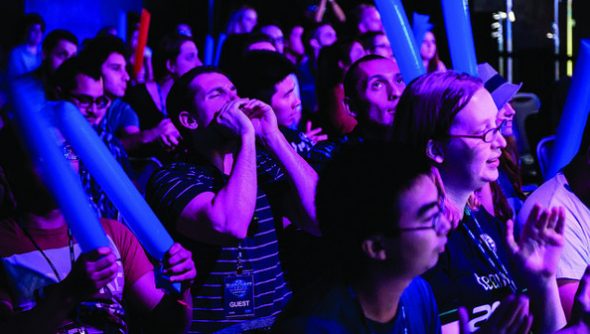 StarCraft’s 2014 WCS series is in its closing stages, and the Global Finals are kicking off right now as the sixteen top-ranked players in the world compete for a $100,000 grand prize. Today’s round of 16 is just getting under way, and features some absolutely fantastic matchups. Those who survive today’s best-of-five matches will move on to the quarterfinals at BlizzCon next weekend.

It’s a very long day of StarCraft, however, and not everyone will want to buckle in for 12 hours of play. So here are the must-see matches of the round of 16.

WCS is already off-schedule thanks to a power-outage at the studio. So what was already going to be a preposterously long day just got longer. But here are the most promising games of the round of 16, with estimated start times. Remember that this tournament is now running about 30 minutes behind, however.

The last series is supposed to start at 3:30 UK / 11:30 PM Eastern and it could easily go much longer. Especially if people start going Swarmhost. So if you’re going to do this thing, you might want to take a nap now.

Go to the WCS website to watch your fantasy picks go down in flames.

It’s rare that a Protoss vs. Protoss matchup is something to look forward to. The matchup is so volatile that it’s like watching two people juggling hand grenades while jousting on unicycles. That’s how high the stakes are in Protoss vs. Protoss for every single action. A missed scout can be instantly fatal, as can a whiffed Force Field or Storm. That makes for tense games, but not necessarily good ones.

Jang “MC” Min Chul and Kim “herO” Joon Ho are not ordinary Protoss players. MC is one of StarCraft 2’s most experienced and accomplished superstars, while herO is a KeSPA trained up-and-comer who once seemed destined to challenge MC for the Protoss crown. This is one of those “who would win in a fight” arguments, except this time we actually get to see the outcome. A best of five series mitigates some of the volatility, and both players are rested coming into this tournament.

The odds definitely favor herO here. His tournament victories have come at the expense of other Protoss players, while MC is usually a master of taking out other races. But like a real-life Rocky Balboa, MC never quite goes away, and he always comes out swinging.

Two of the most exciting players in the world should make for a great series of StarCraft. Joo “Zest” Sung Wook might even be the best player of 2014, with two GSL titles to his name and the KeSPA Cup sitting in his trophy case. He looked utterly flawless at the start of this year, and his form has barely been affected by recent patches.

Lee “Life” Seung Hyun might just be the player to knock Zest out of this tournament. He’s had a good year during a tough time for Zergs overall, and he’s one of the most aggressive players around, which could make it hard for Zest to employ any of the cheese that Protoss like to use to keep their opponents on their toes. When Life gets rolling, it’s one of the most entertaining and scary things in StarCraft, as he seems to play faster than the speed of thought.

They met at IEM Toronto and Zest handed Life a sound 3-1 defeat, but Life has had time to think about that series and craft strategies for this rematch. Still, Life is a great player taking on one who has looked nigh-untouchable at times this year. He’s got his work cut out for him.

Eo “soO” Yoon Su might be the best Zerg player in the world right now, but he cannot win a tournament. That’s a rather serious disability to have if your job is to win tournaments, and you want to make a reputation as one of the game’s greatest players. He’s managed to be the runner-up in all three GSL seasons this year, which is a remarkable accomplishment that speaks to his exceptional skill. It also denies him the legacy he deserves: that of a GSL champion.

On the other hand, Yun “TaeJa” Young Seo is soO’s complete opposite. TaeJa goes around the world bagging championships like they’re canned cranberries and he’s working the checkout line the night before Thanksgiving. He may not win the big prize purses very often, but he is consistently one of the best players wherever he goes.

Stil, soO’s had a more impressive year. Plus, this is the round of 16, and soO has had no problem mowing people down when he’s not under the intense pressure of a finals series. It may not help him, though. The psychological toll of losing three GSL titles in a row is hard to imagine, but don’t look for there to be much wind left in soO’s sails.

There are a couple huge, huge question marks with both of these players. Ko “HyuN” Seok Hyun was the top-ranked player for much of this year, until Choi “Bomber” Ji Sung dethroned him with his WCS America victory. Meanwhile, Lee “INnoVation” Shin Hyung just won a GSL title after being a non-factor for almost a year.

Both these players have something to prove, to themselves and to the StarCraft world at large. HyuN is an undeniably great player, but is he nearly as good as his WCS points totals would suggest? HyuN has been at his most successful on the international tournament circuit, where the competition can be a little less challenging than in WCS or Korea. He’s also attended an awful lot of tournaments, bulldozing his way to the top of the WCS standings through the sheer quality of his placements.

INnoVation, on the other hand, seemed to fizzle out midway through last year and accomplished very little during his stint with Team Acer. His style was outmoded, and he didn’t seem to have the execution or creativity to mount a comeback. But this past WCS season, he came roaring back to life with some truly unconventional play. The question is whether he can make it stick this time or, like last year, he draws from a very limited bag of tricks and keeps nothing up his sleeve.