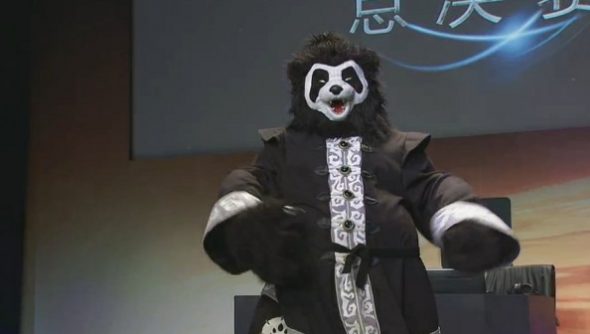 Despite awkward presentation and frequently inept production, the StarCraft II Global Finals at the Battle.net World Championship managed to provide a great deal of drama, excitement, and surprises. That is, when the streams weren’t freezing and crashing during key moments.

Things got off to a dicey start with the awful opening ceremonies, in which Mike Morhaime and a number of executives from Blizzard’s partners in China came to deliver boilerplate speeches more appropriate to a business conference in a hotel ballroom than what is ostensibly one of the biggest eSports events of the year. Making matters worse, most of the stream was completely untranslated or subtitled.

Once the air had been thoroughly sucked out of the room, the competitors were introduced, and then things took a turn for the truly weird.

The streams themselves betrayed similar indifference. Compared to the overlays you see at MLG or DreamHack, the StarCraft 2 streams looked spartan and unprofessional. Ads kept interrupting games, or would cut-off the casters in mid-sentence. They crashed frequently, and at uncannily inopportune moments. One of the biggest surprises of the day, Greg “IdrA” Fields’ victory over Evil Geniuses teammate and fellow Zerg Ilyes “Stephano” Satouri, was marred by a complete stream crash in the middle of a pivotal engagement. When it came back online a couple minutes later, the game was over and IdrA had won.

It’s a shame, because the tournament itself has been quite good, and vindicates Blizzard’s format. While I had misgivings about imbalances in skill in this internationally focused tournament, it was refreshing to see so many unfamiliar matchups and different styles. The result has been a more competitive tournament than expected. In fact, with players like American Zerg Conan “Suppy” Liu and Jon “BabyKnight” Andersen (Danish Protoss) winning their groups against long odds, the Global Finals have already thrown a lot of conventional wisdom out the window. Suppy outplayed Chinese Zerg Comm and American champion Danny “ViBE” Scherlong to move on to the round of 16, while BabyKnight booked his ticket with a 2-0 victory over Jung “Rain” Yoon Jong, who arrived in Shanghai looking like a clear favorite.

That might be the biggest surprise of the day, but it faces stiff competition from IdrA’s triumph over his group. IdrA dismantled KeSPA’s Shin “RorO” No Yeol in two decisive games, then he turned around and did the same thing to Stephano. It looked liked a long-awaited return to form for the American player: he was careful and deliberate, grabbing early advantages and then building them until his opponents had no choice but to either run out of money and lose, or to risk everything on aggression from bad positions. His second game against Stephano, on Antiga Shipyard, was probably his most important victory. Where IdrA’s other wins had come fairly easily, Stephano got out to an early lead and forced IdrA to come break his grip on the crucial map center. Then he made several great counterattacks that pushed IdrA back and, throughout much of this year, IdrA has folded under that kind of pressure. But today, he held fast, trusting in the strength of his position and terrific micro to overpower Stephano.

His reward, unfortunately, is a matchup with Rain tomorrow. Stephano, on the other hand, was eliminated by Team Liquid’s Song “HerO” Hyeon Deok.

The day’s last results are still coming in as I write this, and you can see the final numbers and bracket placement over on Liquipedia. But already, tomorrow promises an exciting bracket, with lots of unexpected contenders from all around the world. Streaming resumes at 1:30 AM GMT / 8:30 PM Eastern.