My first reaction is one of relief. Blizzard can still pull off a great, traditional RTS expansion with a dramatic story and a renewed multiplayer game. I wasn’t sure they still had it in them.

I always felt like StarCraft 2: Wings of Liberty was a bit of a miss from Blizzard. It consciously rejected a lot of positive trends in RTS design in favor of making StarCraft 2 a competitive RTS that would carry on the eSports tradition that Brood War established. The campaign was also a bit too much “Firefly as played by the StarCraft Ensemble Repertory Theatre”, lavish in its production values but frustrating in its predictability. Brood War’s Gothic, tragic overtones seemed to have been lost.

The multiplayer wasn’t for me, at the time, and neither was the campaign. For me, it was eSports that finally won me over, even though I knew it was StarCraft’s emphasis on eSports that kept me at arm’s length. I came to appreciate StarCraft 2 by watching others playing at a level I could never attain. It was a game I always admired, and never loved. 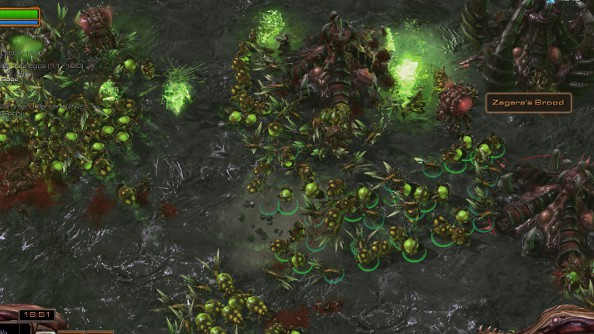 I had no idea what to expect from Heart of the Swarm. It had a difficult set of objectives. It had to revitalize a competitive scene that was starting to suffer from oversaturation and imbalance, create a new campaign that would be knee-deep in StarCraft lore, and find a way to make StarCraft multiplayer more accessible and appealing to those of us who don’t want TeamLiquid.net to become our personal Talmud.

Heart of the Swarm been out for less than a week and it’s obviously far, far too early to assess how it succeeds on most of these fronts. The fate of the competitive scene, for instance, is an issue that will be settled over the coming year, although we’ve seen some encouraging signs at IEM and MLG. A lot of established build-orders have gone by the boards, you’re seeing new timing attacks and compositions, and previously under-utilized units now have viable roles to play.

Still, everything I’ve seen so far has me excited for this current iteration of StarCraft, and impressed with how well it addresses some of my frustrations with the last game. The campaign, especially, seems like a huge step forward and a very smart evolution of the groundwork laid in Wings of Liberty.

Heart of the Swarm reintroduces us to Kerrigan, a character that was never terribly well-fleshed out in Starcraft even though she’s always loomed large in its fiction. She was a supporting character in StarCraft, and the romance between her in Raynor scarcely seemed to begin before she was captured and turned into the Queen of Blades. It’s something that always rang a bit false in Wings of Liberty, which almost seemed to retcon Raynor and Kerrigan as doomed lovers. I never bought that this mutant-woman who had burned half the galaxy to a cinder was somehow someone still in need of rescue (or even capable of it).

Ironically, I think it’s those weaknesses that make Heart of the Swarm’s personal focus on Kerrigan so successful. Seeing events from her perspective, her rescue has led to imprisonment and Raynor, for all his devotion, is just another cloying warden. It’s not just her actions that are circumscribed, but even her feelings: Kerrigan musn’t feel anger, mustn’t think about what’s been done to her or by whom. She just needs to move on. All of which makes the main action of the campaign much more relatable, as it covers Kerrigan’s conscious choice to remake herself as the Queen of Blades (and finally escape that mortifying ghost-outfit Blizzard saddled her with). This time it’s on her own terms, and not just as a pawn of Mengsk, or the Overmind, or even Raynor. The title turns out to be about what Kerrigan is imparting to the Zerg as she begins reshaping them to reflect her own experiences.

In keeping with Wings of Liberty, this Zerg campaign includes a lot of units you won’t find in multiplayer, and lets you use variants of standard zerg units through the miracle of “evolution missions.” In a short try-before-you-buy level, you get to tear apart some enemies with a choice to two different Zerg variants, then choose which one you’ll use for the remainder of the campaign.

The levels themselves were a bit of a drag, slowing down the main campaign action, but I really enjoyed the special Zerg units. Do you want jumping Zerglings that vault up cliffs and over enemy units, or do you want an instantly-spawning variety that deploys three Zerglings per egg, as opposed to two? Both have their advantages, and will replace the standard version, but all sales are final in the Evolution Chamber.

The other part of Heart of the Swarm is the new units and revisions to multiplayer. These are harder to assess at this stage, because they’re so subject to change and it can be so hard to see the impact of Blizzard’s changes. For instance, not having to research siege mode for Siege Tanks is a huge relief and removes a frustrating bottleneck from Terran production, but I can’t tell you how much it really changes build order and timings. StarCraft is a nuanced game, and it’s hard for me to identify how this latest edition to the game evolves the factions.

That said, there are a few things that stand out even now. For one thing, the Widow Mine has gone from being kind of a minor, underwhelming unit in the HotS beta to being a powerful dual-use area-denial weapon. Deployed forward of defense lines, they can hobble attackers making their way through the minefield and then devastate them in a crossfire between the regular Terran units in front and the Widow Mines. They can also protect Terran worker lines from drop attacks, or just guard the back-door of a crucial position. They are a useful tool that works in conjunction with traditional Terran strategies, but don’t overturn them. The other obvious change is the Afterburner ability for Terran Medivacs, which opens up a whole new world of Terran drop and harassment tactics. Aas we’re seeing at MLG this weekend, it’s possible Blizzard have gone a bit too far with improving the Terrans and failed to include adequate counters for other races.

And yet for all of that, there is something indefinably better about Heart of the Swarm. I hate myself even for writing that, but right now I’m noticing differences in the experience without having fully sussed-out what’s changed. The action just seems a bit faster and more varied than in Wings of Liberty. Heart of the Swarm dispels that early-game boredom I felt so often in Wings of Liberty.

Right now, Heart of the Swarm has expanded the number of viable strategic choices for each faction. It’s probable that some of those will be winnowed out as the community figures out what really works. But for now, Heart of the Swarm seems to have evolved the faction matchups and introduced more variety, which is what StarCraft 2 needed most of all.