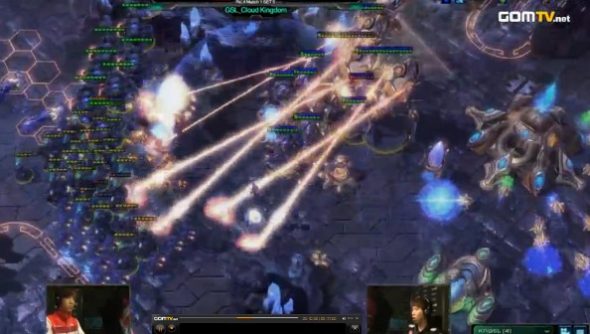 There were some great storylines heading into this morning’s GSL Code S semifinal round. GSL Starcraft. SK Telecom’s Jung “Rain” Yoon Jong had just locked in his trip to the finals for OnGameNet Starleague’s inaugural StarCraft 2 tournament and was one series win away from going to the GSL finals. Standing between him and a historic concurrent finals appearance was GSL legend Jung “Mvp” Jong Hyun. Meanwhile, Team Liquid’s top Terran Yoon “TaeJa” Young Suh was squaring off against StarTale’s 15 year-old Zerg prodigy, Lee “Life” Seung Hyun, in his first appearance at GSL.

Match spoilers abound after the jump, so if you want to catch the games for yourself, you should head over GOMTV’s website.

Rain and Mvp traded matches through their series with classic Protoss and Terran play. Mvp denied Rain his favored Warp Prism drop play with Vikings, and used Ghosts to counter the High Templars that Rain built to counter Mvp’s bio-heavy forces. Rain enjoyed his greatest successes when he caught Mvp trying early aggression and sent him reeling back across the map with losses of both units and mining time.

Each anticipated and countered the other across four matches, until Mvp was finally able to string two victories together and take the series. In Game 5 he went for early aggression yet again, pulling SCV’s to soak up damage, and sending in a ton of Vikings to knock down Rain’s Colossi. This time he had the right build and the right timing, and Rain’s lack of map vision doomed him as Mvp assembled his units for a final, uncontested push up the ramp. It had taken a few tries to find the right composition and timing, but on Cloud Kingdom, Mvp finally got his decisive early victory and yet another trip to the GSL finals.

The real surprise of the day was TaeJa’s disastrous encounter with Life. I’m not sure anyone knew how good Life was until today, especially because his last GSL victory was aided by MarineKing’s near-total meltdown over the course of their four games. TaeJa played more conservatively… and still got swept. What was really striking about Life, however, is how different he looked from other championship-winning Zerg. He looks to dictate the pace of a game from the start and increase the pressure throughout, instead of simply playing conservatively until he can get an Infestor / Brood Lord “deathball” army together. Life seems almost to avoid going for late-game builds, only grudgingly going to late-game tech when his fast-paced early and midgame play can’t land a killing blow.

TaeJa made some huge mistakes, of course. He threw away his first game through a misclick that sent all of his SCV’s across the map to die. His second game featured another blunder when he lowered a supply depot to allow zerglings into his base, forcing him to pull SCVs to contain the damage.

But the real star of the match was Life’s aggressive Zergling / Baneling play. He seemed to be everywhere at once, and there was scarcely a moment when TaeJa was not either worrying about his workers getting wiped out by Baneling hits, or trying to get a good army spread to avoid catastrophic losses. He made the map incredibly unsafe for TaeJa, almost paralyzing him while Life expanded. Even when TaeJa seemed to be prepared for Life’s attacks, like when he was set up to receive a massive Zergling / Baneling / Ultralisk attack in Game 3, Life just blasted through successive lines of Siege Tanks and Marines, destroying TaeJa’s army and nearly getting the Planetary Fortress it was defending before TaeJa managed to bring down the last pair of Ultralisks.

The final, then, is a match between the experienced champion Mvp, who has seen and defeated just about everything, and the young first-time GSL player Life, who plays Zerg in such an aggressive an unexpected way that he basically humiliated two of the world’s best Terran players.

Mvp is the most successful Terran in StarCraft 2. He has ten days before the Code S Final on October 20th. He needs to discover what eluded both MarineKing and and TaeJa: a way to counter this terrifying upstart. Life just needs to kill one more Terran, and the championship is his.