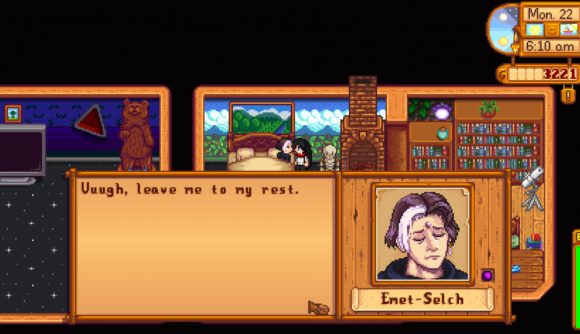 I’m still wrapping up Stormblood in my own FFXIV playthrough, but if there’s one thing I know about Shadowbringers, it’s that people are into Emet-Selch. He even has his own page on Sexypedia, which I just learned is a thing. Well, if you’re one of the multitude who wants to get down with Emet-Selch, there’s now a Stardew Valley mod for you.

The NPC Emet-Selch – Wizard Replacement and Spouse mod does exactly what the name suggests: it replaces Stardew Valley‘s wizard with Emet-Selch and turns him into a marriage candidate. You can grab the files for yourself over on Nexus Mods, but be aware that there are Shadowbringers spoilers in all this – so hold off if you’re not caught up.

Emet-Selch has over 100 lines of custom dialogue, and a special schedule for leaving the tower, which will gradually expand as you build a friendship with him. Modder Pumpkinium plans to replace the wizard’s theme with a more appropriate custom music track, too, but that’s not yet implemented in the current version.

Whether you’re into farming games for the crops or the romance, you can find more at that link.

hi! i am proud to announce the official release of my first Stardew Valley mod that replaces the Wizard NPC with Emet-Selch! he can be your spouse as well! the link to the mod page is in the replies! if you have any issues, please submit a bug on the mod page! enjoy!! #EmetSelch pic.twitter.com/7lqJYJxhx9