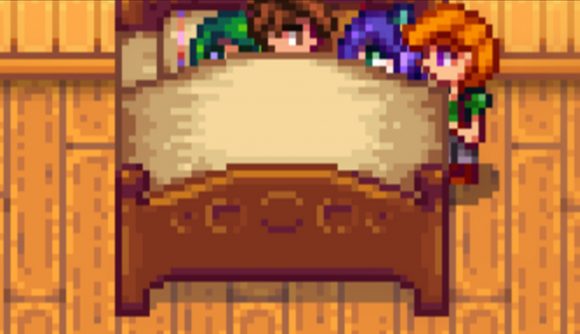 For as long as games have let you get married, players have wanted to break the limits of the traditional institution – whether as a nod toward inclusivity for non-monogamous relationships or simply as way for you to star in your own harem anime. A Stardew Valley modder has finally made those dreams come true.

Simply titled Polygamy, bwdy’s mod lets you marry every single eligible NPC in the game. It’s a full replacement for the existing marriage system, and as such it’s still a bit touchy – which is why this release is noted as “an early test build.” Once you’ve gotten hitched multiple times, the mod cycles through a “primary” spouse each day with normal AI, while the others simply wander around the farm.

It’s a bit limited in its current form, but it answers a long-standing request for polyamory in the Stardew Valley community. The vanilla game has generally been committed to monogamy, to the point at which one of the game’s updates added a scene when all your beaus would get mad if you’re dating multiple options.

Mods have rewritten that scene to be friendlier to your efforts, but up until now there hasn’t been a true option for polygamy.

You can get started on your new polygamous life through Nexus Mods.

Stardew Valley is set to get more official content updates in 2019, so there’ll be plenty more to keep players occupied in their farming efforts throughout the year. If you can get away from all your partners long enough to work the fields, anyway.