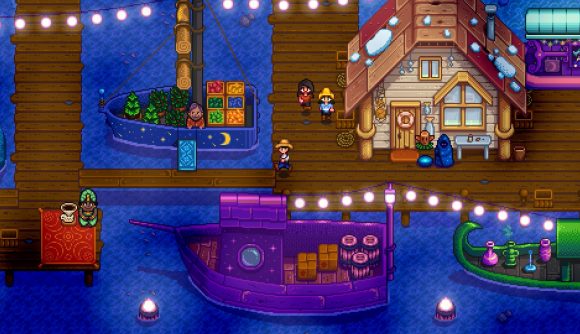 Stardew Valley’s sole creator has amicably split with former publisher Chucklefish to strike out on his own, and he says he’s got more content planned for Stardew Valley in 2019. Right now he’s working on adding the multiplayer update to the Xbox One and Playstation 4 versions, but he says patch 1.4 is on its way. That’s meant putting his next project, another game set in the Stardew Valley universe.

In an update posted Friday, Eric ‘ConcernedApe’ Barone discussed his goals for Stardew Valley now that he’s self-publishing the game on most platforms (Chucklefish will continue to support the Nintendo Switch and mobile versions). Barone says that while he’s at times wanted to move on from Stardew Valley, he finds himself regularly coming up with new ideas for the game.

“This world is so full of potential, I could probably work on it for the rest of my life,” he wrote.

On top of that, Barone says he just likes making new stuff for Stardew Valley players.

“There’s such a wonderful community surrounding the game,” he said, “and I like making you guys happy. I’m extremely grateful to all of you for supporting my work and creating this wonderful Stardew Valley community.”

Barone didn’t get into specifics on either the planned content update for Stardew Valley, or on what his focus is for his next game. Update 1.4 will be a solo update, he says, but so far he’s keeping further details to himself.

Read more: Head this way to find the best mods for Stardew Valley

It’s a lot for a solo developer to take on alone, and Barone says he plans to hire a team to help share the workload in the future.

“This is going to be a big change for me,” he wrote. “I’ve always worked alone, and working with a team is a whole new ballgame … My hope is that the new team will help take some of the workload off me, so I have enough breathing room to divide my time between my new game and Stardew Valley.”

Barone says he’ll always handle music and writing personally, but that a team will be able to help with programming, bugfixes, and art. He’s planning on bringing the team on board once Update 1.4 is finished, so presumably there’s even more in store for Stardew Valley this coming year.