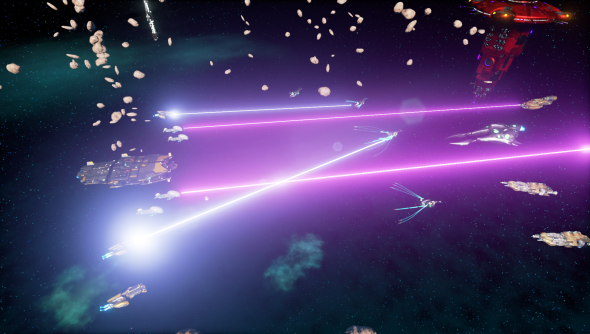 If Gratuitous Space Battles was the pummeling thrash of Slayer, and GalCiv III the glacial drone of Black Sabbath’s War Pigs, then Starfall is Sandman-era Metallica: still chugging along in tense real-time, but slow enough that its multiplayer fleet management can be enjoyed by tabletop wargamers.

When asked to expand on the metal concert thing, Grigoryev said that his team were in the business of building “fulfilling fantasy”.

“Let’s face it,” he said. “Real space battles would be quite different than what sci-fi movies taught us. In fact, they would provide quite a boring viewing experience. Luckily, we are creating a game experience.”

Snowforged Entertainment, so named for their location in the hills of Siberia, believe that classical RTS, 4X and wargames tend to specialise too heavily. In each case, some key aspect is overlooked: an expansive universe; complex management; half-decent combat.

In Starfall Tactics, they hope to tie tactical, fleet-scale fights to a decaying galaxy big enough to get lost in. Their war-torn vacuum will be dotted with rare ship modules which, when found, will feed back into the battles.

“Imagine being able to take a unit from a typical RTS and give it a range of active and passive skills that can completely change its role on the battlefield,” said Grigoryev. “Our goal with modules is to give players the tools to create unusual builds, come up with crazy tactics, and feel rewarded for it.”

Snowforged want to encourage experimentation: the player inventive enough to equip a couple of low-cost ships with the Cloak System and Self-Destruction modules, for instance, will be rewarded with a pair of invisible kamikaze bombers.

“One of the main avenues for expressing yourself In Starfall Tactics is your fleet,” said Grigoryev. “Different players will have distinct play styles, and they might even have signature fleet compositions.” 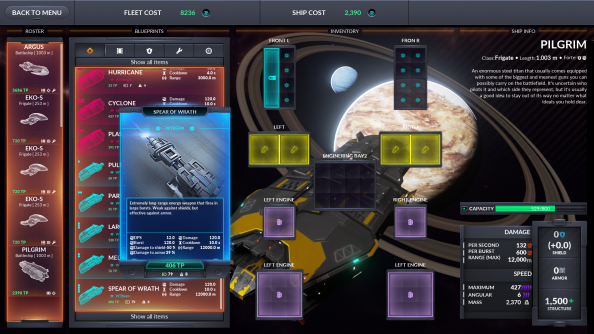 Loadout customisation deepens with ship blueprints, displayed neatly as cards. With the application of the right parts, the same ship can be scout, heavy cruiser or assault carrier. Every part of a vessel can be swapped out, from its engines up to its paintjob.

“Just like a band has to look the part before going onstage, you’ve got to have an awesome-looking space fleet,” reasoned Grigoryev in Starfall’s campaign pitch. “It’s a symbol of status and power.”

The cards and paintwork are also a sign of Snowforged’s fondness for distinctly un-digital games. Kickstarter footage of their office takes in Warhammer miniatures propped proudly on their desks.

“The original idea for Starfall Tactics was to bring the same kind of combat depth that we enjoy in tabletop wargames to the RTS,” said Grigoryev. “There is great synergy between these two genres.”

As with any digital adaptation, there’s the allure of convenience. Snowforged want to play tabletop games without the hassle of organising a session – an appropriate location, a table to seat enough people, a schedule that works for everyone – and suspect others do too.

“It’s no surprise that a good portion of wargamers play at least half of their games alone,” said Grigoryev. “But board games rely on social interactions to create meaningful, memorable experiences. For a truly rewarding session, you need other people. This is a problem that our game aims to solve.” 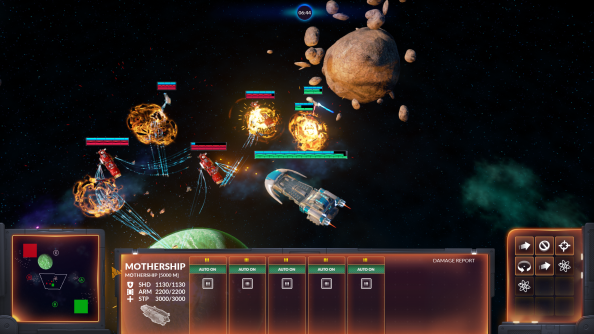 If Starfall’s Kickstarter fails, Snowforged will release a multiplayer, session-based game. But if it succeeds, they’ll bring players together in their thousands on a persistent galactic meta-map.

The player’s fleet, represented by a single starship, will drift about stealing territory from pirates, mercenaries and battling factions.

“We want players to stay for the long haul,” said Grigoryev. “Our plan is to provide an immersive experience that is very different than a 100% session-based game. A persistent world encourages both cooperation and competition between players.”

A wargamer’s paradise. So why is the blast-icuffs in real-time? The team were concerned about pacing; about keeping players engaged at all times.

“Turn-based games provide a great way to control every aspect of your experience, in your own time,” said Grigoryev. “However, turn-based combat can also be a drag and negatively affect a game’s momentum if it’s not managed properly.”

Rather than risk that, Snowforged are designing a combat system that sees events unfold in the vacuum in real-time. But it’ll be unhurried enough to allow players to adapt strategies on the fly, and to maintain tension. 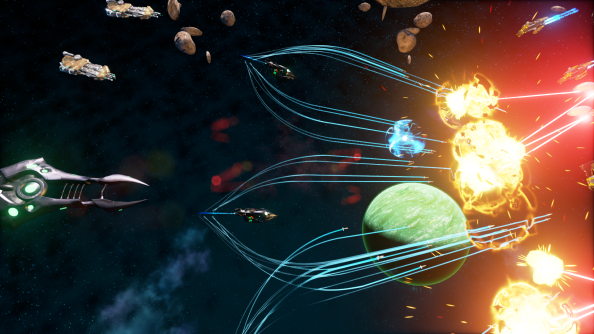 Snowforged have spent quite a bit of time adjusting movement and action speeds to prevent information overload during heated battles. It’s an ongoing balancing act: the studio have hosted several playtests at their office, and are planning plenty more before launch.

The game’s found a home in Unreal Engine 4 – because the team consider it the “most technologically advanced” engine on the market, and because it’s allowed them to write the game’s innards in C++ while programming high-level tasks in Blueprint – Unreal’s visual scripting system.

“Unreal Engine 4 enjoys quite a supportive community of developers,” said Grigoryev. “Thanks to the active involvement of Epic Games, this community keeps expanding.”

Starfall’s community is expanding too; it was Greenlit after just nine days on Steam this month. But hark at the handful of Kickstarter backers who’ve pushed Snowforged nearly halfway to their goal at the time of writing: just 295 of them contributing over $21,000. This steadily-paced strategy game may take its time in landing a hit – but its capacity for self-expression means that when it does connect with a potential player, it turns out to be a very big hit indeed.

In this sponsored series, we’re looking at how game developers are taking advantage of Unreal Engine 4 to create a new generation of PC games. With thanks to Epic Games and Snowforged Entertainment.