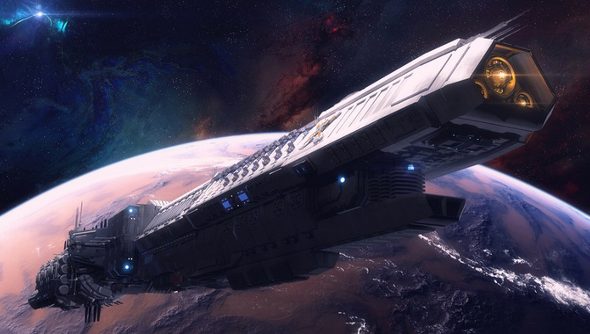 Elite fans got Elite: Dangerous, Wing Commander fans are getting Star Citizen, but what about X-Wing fans. The series did just appear on GOG and Steam, but as great as they are, gosh they’re a bit old now. This leaves the door open to Impeller Studios and Starfighter Inc. It’s not a new X-Wing game, it’s not related to Star Wars at all, but the team’s goal is to carry on the series’ lineage.

It’s on Kickstarter at the moment, and is half-funded with 24 days to go.

Starfighter Inc. is all about the combat. It’s a multiplayer PvP game, so expect more dogfights and less interstellar trading. There’s a focus on hard science and Newtonian physics, as well, so you might find yourself spinning around, a victim of the forces of physics.

Pilots will be able to customise their ships cosmetically and practically, adding new components that can be damaged in combat.

“Every system on the ship is susceptible to damage and each has a unique effect on gameplay,” the developer explains on the Kickstarter page. “Shrapnel hit to your maneuvering thrusters? Spend the rest of the battle in an unstable, erratic beast. Main sensor cluster fried by enemy lasers? Looks like you’re going to have to fly blind. Missile hit in the cockpit? Well, you get the idea.”

Corporations will allow players to team up and participate in missions posted by these player-run mercenary groups. Succeeding can secure advancement up the corporate ladder, unlocking new missions, ships and gear discounts.

There’s a hint of games like Battlefield and PlanetSide, as well, with some ships featuring multiple seats (pilot and gunner, for example) and troop transports that can dock with enemy vessels, unleashing soldiers into its insides.

Impeller includes, in its roster, David Wessman, the design and story lead on X-Wing, and Jack Mamais, the lead designer of Far Cry and Crysis.

The studio is asking for $250,000 on Kickstarter, but has stretch goals that go all the way up to an exceedingly optimistic $17,000,000. That’s what they’ll need to add a scripted cinematic single-player campaign, but an earlier stretch goal includes a dynamic campaign.