Stealth games have gone through a noticeable shift over the past few years. A shift from evasion to confrontation. To the point where many popular series in the genre now make stealth just one option, rather than the only way to beat a mission. It does make some sense. Stealth games have always been a niche. They demand patience, careful observation, and the gratification they provide is often invisible to the outsider (no, not that one). Stealth games are often at their most satisfying when nothing is happening. How do you market that?

Hitman never shied away from its violent components, with an arsenal that has only expanded with each game in the series, a leaning that peaked with the action-heavy Absolution before the series returned to its more measured roots in its latest guise. The same can be said for Metal Gear Solid, which went from a series with few violent options (and controls too clunky to ever justify using them) to The Phantom Pain, where you are given an arsenal that includes a mech armed with miniguns.

Dishonored is the modern-day poster child for this change in the genre, as it plays off the tension between violent and non-violent paths, with choices often coming down to being silent and harmless or a whirlwind of steel and blood. These stealth games aren’t necessarily poorer for their broader options, but they are more approachable and forgiving than the games that popularised the genre – Castle Wolfenstein, Metal Gear, and Thief. This shift hasn’t gone unnoticed either. 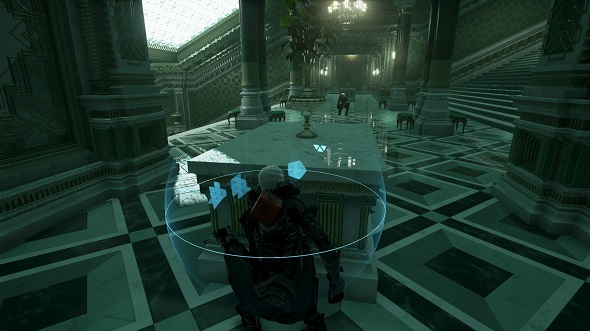 Echo is a new stealth game from ex-Hitman developers and within its shiny marble halls can be found a statement on the nature of modern stealth games. It is a sci-fi game with a simple premise. Visiting a remote world and breaking into its sprawling subterranean palace, you are confronted with clones of yourself manufactured by the palace. They have only one goal: to kill you. How they achieve this depends entirely on you. Their behaviour is learned from your own. Hence, the game revolves around cycles, with the actions you take in one cycle being copied by the clones in the next. They can only do what you do.

The scenarios that Echo puts you in offer limited options and most of the tools you do have are offensive ones. A deadly pistol and silent chokehold are among your core skillet, but using them means giving those abilities to your opponents – something you should put off for as long as possible. Compare this to Dishonored, which allows you to adjust your playstyle regularly without profound consequences. Its ambition is to be more of a sandbox that allows you to do what you want – murder everyone in a palace, sneak through as a rat, leap across the rooftops. 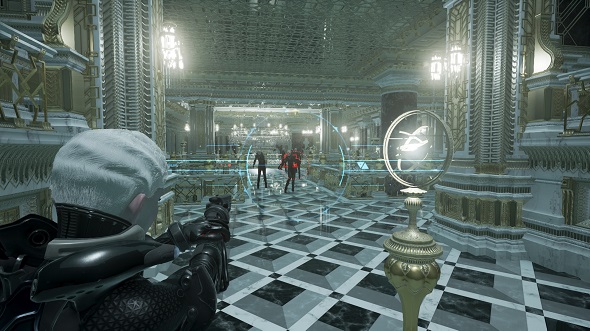 Echo, instead, is all about limitations. The less restraint you show the harder the game will become. If you start clambering over obstacles then the next time you have to flee the clones chasing you won’t stop at a wall as before. Start shooting your way through your foes and you can expect to find yourself on the receiving end of a stream of bullets next time. There is something startling about the first time a clone strangles you from behind, the way we have in a dozen games to hundreds of foes before., It is especially unnerving when you know the attack is your own behaviour turned back on you.

All that said, Echo is still a world away from the genre’s roots. Thief: The Dark Project and Thief II: The Metal Age are considered to be the birth of the modern, 3D stealth game. It pulled together so many of the defining features we associate with the genre: patrolling guards, the cycle of detection and evasion, lethal and non-lethal takedowns. Yet, the ratio of the latter aspect in the early Thief games is still distinct, and is why, despite their dated graphics, they feel timeless. 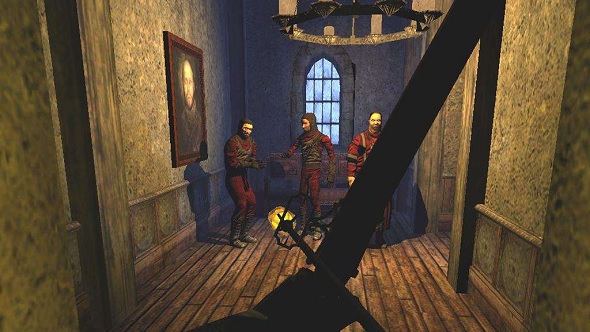 Thief is built squarely around stealth. You have a sword and broadhead arrows, but the violent options always feel like the compromises they are. A thief who kills everyone in a building to steal a single painting is a blundering amateur, and Thief compounds this through its design. No confrontations ever feel necessary. If you are caught out in The Phantom Pain then you can just shrug and shoot your way out. Snake is such a capable protagonist he can prevail no matter the circumstance. In Thief, if you are caught, your best bet is to run. Fighting is slow and ineffective. Guards kill you as quick as you can kill them but they outnumber you, so you almost never stand a chance.

This is the key difference between Thief and its modern brethren. You are deliberately disempowered, made weak so as to rely much more on your wits and planning. The shadows are your friend and manipulating the environment to suit your needs is the best course, not removing every opponent from the level. Most modern stealth games instead want you to feel capable in all situations. It is perhaps the result of the insta-fail screens that come with bad stealth sections in games – forcing you to restart if you are so much as seen – which put so many people against the genre. Now, stealth games are often also full-on action games, hardly ever making sneaking around the only way to progress. The stealth aspect becomes discountable. 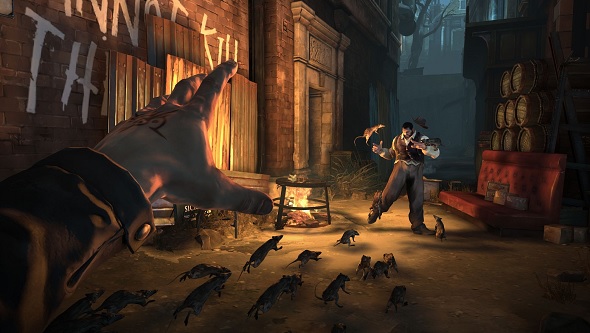 More recently, Alien Isolation captured the essence of the classic Thief-style stealth experience. Creative Assembly’s game is not focused on violence and action, but is instead built around evasion, distraction, and thoughtful navigation. On the surface, Isolation doesn’t look even remotely related to Thief, and yet the way it disempowers the player with a truly challenging opponent results in a robust stealth experience.

Many horror games have made similar compromises to the stealth genre over the years, diminishing that all-important sense of helplessness by introducing more ways to fight back, and more athletic protagonists. And those that avoid this trap often rely on a basic hide-and-seek dynamic that grows old fast.

Alien: Isolation has its fair share of lockers to cower in, certainly, and it even features weapons. But while a flamethrower might buy you some time, CA limit the efficacy of your offensive options to create a supreme sense of disempowerment as you are hunted down relentlessly by the eponymous xenomorph. 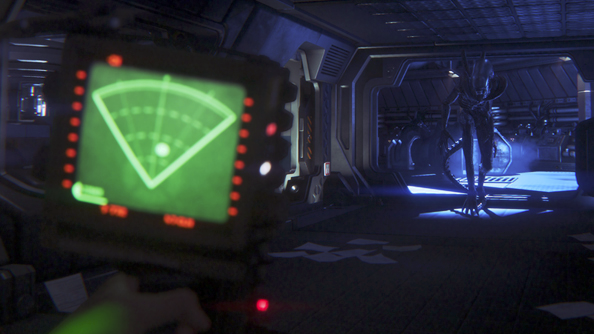 As Ripley, you have numerous tools to distract opponents, different ways of traversing the environment, and a number of riskier options that give you some control of that environment too. There are no water arrows or shadows to hide in as in Thief, but Ripley can seal doors and break air filters to shroud rooms in fog. You might be contending with one smart and fearsome foe that you can, at no point, kill, but Isolation doesn’t want you to feel absolutely helpless. It wants you to rely on your wits and plan for a way to survive an area – and then throw together a backup plan in a panic when the alien drops unexpectedly from a vent right into the middle of your path. Your unique relationship with the alien throws up wrinkles that push the genre in new directions as you begin to rely on the creature, manipulating it into taking out other hazards in your way, such as the many androids that will kill you on sight.

The delicacy and flexibility of this relationship highlights why it saddens me to see action dominate the stealth genre these days. Despite Alien: Isolation’s success, no l stealth games since have even remotely explored what else can be done with that approach – one that catalyses creativity from helplessness rather than empowerment. The fact that Thief still holds up in so many ways encapsulates how little progress has been made. Alien Isolation’s small changes to the stealth dynamic prove how much there is still to discover in this genre. Let’s put away the guns and supernatural powers. It is time to go back to the shadows.