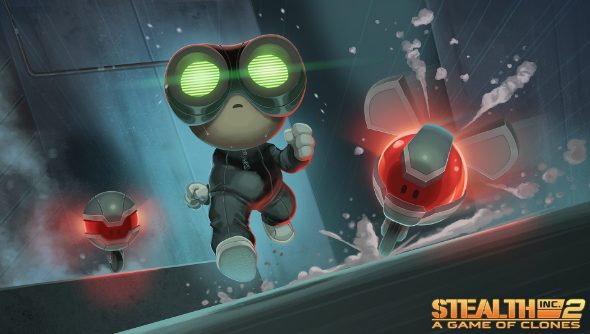 Videogames are just the best. But do you know what is better than videogames? Free videogames. Luckily for us, every now and then a publisher or retailer loses all sense and gives something away. If you’ve been waiting for Stealth Inc. 2 to go cheap, you better head to the Humble Store before August 31, as it’s currently free.

The best thing about this freebie is how little effort it takes. Just head onto the page, add it to your basket, click something to prove you’re not a robot and boom – Steam code. To top it off, it’s for the Deluxe Edition of the game.

Originally a Wii U exclusive, Stealth Inc. 2 is a side-scrolling stealth puzzle game that’s a sequel to a game that was once called Stealth Bastard, which is among the best game titles I’ve ever come across. I quite enjoyed the original, frustrating as it could be at times, so naturally I’m looking forward to getting stuck into the sequel now I have grabbed it for free. I did it for you, the readers. I had to make sure it was legit, you see.

Check out the Wii U launch trailer below:

Want more stuff? While they aren’t free, Ben has put together a list off all the best weekend deals that you can check out HERE.