Confirming leaks from last week, Steam is getting a big overhaul to its chat feature – and you can join the beta right now.

The biggest new feature is persistent group chats ‘built for gaming’, and – it has to be said – this looks a lot like Discord. Tabs for each chat run along the top of the window, while your friends list runs down the side. Adding friends to a chat is as simple as dragging and dropping them across, but you can also invite people with a Discord-style link. From left to right, chats now have text and voice channels, then the main chat, then a list of group members – exactly like Discord.

Need something to play while you use the swanky new Steam chat? Check out our list for some great free Steam games.

Away from group chats, the friends list box has had an update. It’s now more flexible – you can drag your favourite friends and chats to a new pane at the top of the box, and you can group them all by game or by party.

Rich presence will also show such details as where a friend is within a game, who they’re playing with, whether they’re available for matchmaking, and other details as determined by the developer. Voice chat has also been improved, and all chats should be more receptive to multimedia: you can paste pictures from the clipboard and links to gifs or YouTube videos directly into a chat and have them appear in-line.

Head to Steam’s community announcementfor a full rundown of what’s in the update. If you’d like to give it a spin, you can try the beta through your browser here or in Steam here. 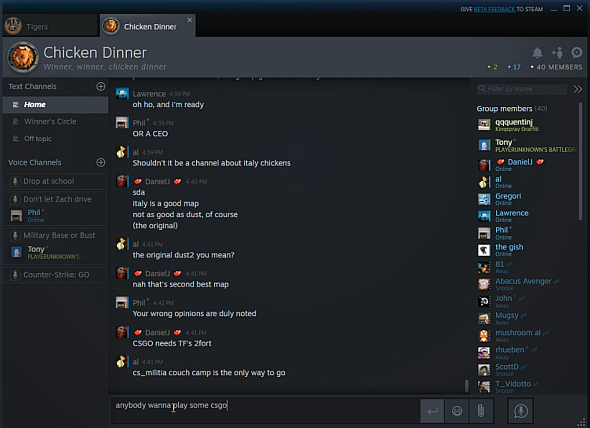 This all basically confirms a leak from a few days ago, which saw a series of assets posted to Twitter and several forums. From that, we learned you’ll be able to assign permanent nicknames to people on your friends list, meaning no more wondering who the hell someone is after they change their name and display picture. There’ll also reportedly be improved voice chat, which sounds as though it will be somewhat similar to Discord’s voice channels.

If you’re curious, you can view the leak via the original forum post, or on Reddit. A datamine from Steam Databasealso uncovered references to updated chat rooms, voice chat, and media uploads, among others.