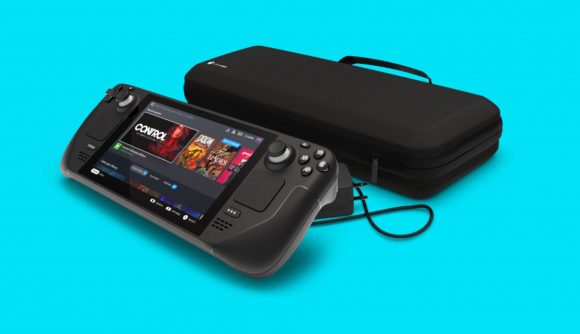 Epic Games recently announced a Linux version of its Easy Anti-cheat system that works with Steam Deck out of the box. As a result, the portable gaming PC’s launch day compatibility list gained a few heavy hitters, like Apex Legends and New World. While the arrival of Easy Anti-cheat isn’t a complete solution to the Deck’s compatibility caveats, BattlEye has now announced that it’s also going to be compatible with the upcoming handheld.

Of course, if you use Linux on your rig, you’ll know that BattlEye already has native Linux support. However, BattlEye’s announcement confirms that it’ll work with Valve’s SteamOS 3.0 and its Proton compatibility layer. Naturally, this is a huge win for Valve, as it means various multiplayer favourites like Destiny 2, PUBG, Fortnite, and Rainbow Six Siege will now be playable on the portable.

BattlEye’s Steam Deck compatibility is great news, but its arrival on the handheld comes with small print. According to the anti-cheat solution’s clarification, developers will have to “opt-in”, suggesting that specific games could forgo compatibility. While it’s hard to think of a compelling reason why a company would want to do this, Valve’s PC competitors could, in theory, use the option to their advantage.

The Steam Deck is on something of a winning streak in terms of software support. Yet, questions still linger regarding the device’s overall compatibility and performance. It’s important to remember that the Steam Deck is a small gaming PC, so it should be just as capable as your desk rig, albeit with some performance tradeoffs.

BattlEye has provided native Linux and Mac support for a long time and we can announce that we will also support the upcoming Steam Deck (Proton). This will be done on an opt-in basis with game developers choosing whether they want to allow it or not.

For example, Bungie previously disclosed that BattlEye could reduce performance in Destiny 2, so while the anti-cheat system’s Steam Deck presence is a blessing, it could also be a frame cap curse.