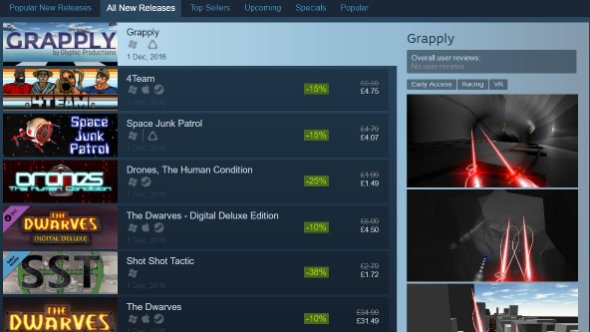 It’s been a busy  year for games, eh? Well, deep in the depths of Steam, it’s been even busier than you might have at first imagined. In fact, to play all 2016’s new Steam releases you’d need to switch between over ten new videogames a day.

There’s no way to buy that many games, so check out our list of the best free Steam games.

According to business development resource SteamSpy, there were4207 Steam games released this year, accounting to almost 40% of the total games on Valve’s digital distribution service. Compare that to 2013, when 565 games were released, and it’s easy to see how bloated it’s becoming.

Here’s the chart with the data:

38% of all Steam games were released in 2016 pic.twitter.com/JiX2pt6JhB

It’s worth noting that these figures don’t include DLC, movies, and VR software, and they also skip a few hundred releases that have no owner data attached to them. It’s just games that were released and games that entered Early Access this year.

If this trend continues, next year will see that number rise again. Hopefully we don’t see Steam go the way of Google Play, which is packed full of actual garbage.