For whatever reason, Valve don’t want us to go outside. Like overprotective mums, they’ll do anything just to keep us in our soft beds at night, bathed in the cool glow of a laptop, duvets tucked up our necks like napkins. So now, as the season reaches its sweaty peak, there’s something in the air besides the midges – the faint hum of an oncoming Steam Summer Sale.

The first piece of evidence I’d like to turn your attention to is a supposed Steam Support email to a customer. This dogged individual has asked if they can buy Left 4 Dead for a previously discounted price, and received the following negatory reply: 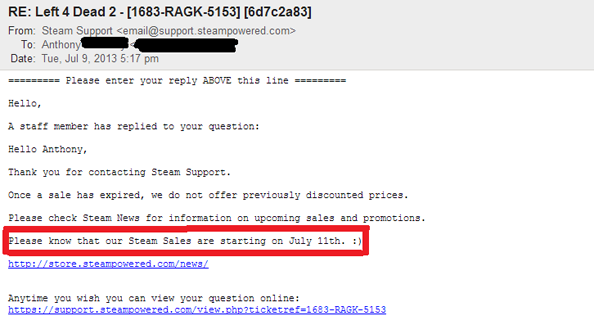 Unambiguous, that. Next, the message from Steam’s Russian payment partners QIWI, offering a discount on Steam Wallet deposits ahead of an apparent sale – again, listed for July 11.

Then there’s the same offer sent from another partner, Yandex.Money. And the current Midweek Madness deals, due to end six hours early at 10am PST tomorrow.Plus the recent TF2 update responsible for the ‘Summer Appetizer crate’.

And finally, a thought of my own: there’s not all that much Summer left to be Steamed. It has to happen sometime soon, doesn’t it?