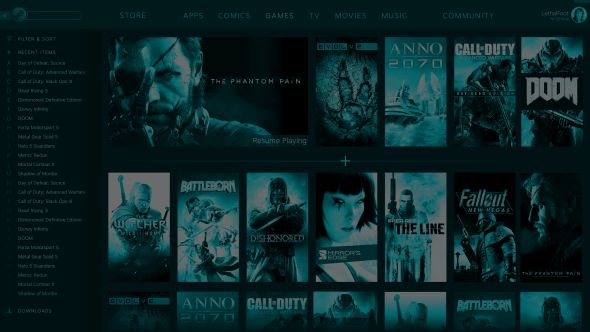 Some images bundled with a recent build of a Steam client beta suggest that a radical new version of the PC gaming platform could be on the way, with hubs for entertainment beyond the world of gaming.

Could you be playing these upcoming PC games on a new version of Steam?

The apparent leak comes via Steam Database on Twitter:

The images were uploaded to GitHub, so you can check them out here.

The files were issued in a new beta build of the Steam client, and were briefly available to all users participating in client betas before Valve pushed another build which removed them.

Steam Database do advise that these are just concept images, and may change radically before the next version of the Steam client is rolled out.

The filenames mention ‘SteamU’, which might stand for ‘Universal’ according to a bit of detective work by Rntm14 on Reddit. Rntm14 searched for the user ‘LethalFoot’ – visible in the leaked images – and was pointed to a profile named ‘SteamUniversal’, which set itself to private shortly thereafter.

One of the leaked images has tabs for apps, comics, TV, movies and music, and another suggests a good deal of social media integration. Could Steam be about to relaunch as a “universal” entertainment platform?

Postscript: someone – a UI artist at Valve, presumably – seems to be having fun with the placeholder images. Xbox One exclusives Halo 5: Guardians and Forza Motorsport 5 are in the Steam library, and the ‘K’ in Mortal Kombat X has been corrected to the proper ‘C’. Finally.