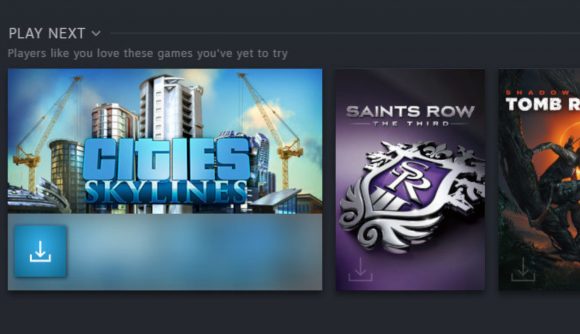 We’ve all been there, staring at our Steam libraries, so thick with unplayed games that it’s impossible to even make a decision – thus, your backlog sees no attention and you just go watch YouTube or something. Steam’s Play Next feature aims to make these life-changing decisions a bit easier, and it’s just graduated from a Steam Labs experiment to a proper part of everyone’s library.

Next time you update Steam, you’ll find a Play Next shelf in your library – like any shelf, it can be removed or re-added whenever you like. It’ll make use of Steam’s recommendation algorithms to suggest unplayed games from your library to you, based on which title other players with similar tastes have poured time into.

The experimental iteration of Play Next sat on a separate web page, and would offer up a rotating selection of three games from your library that you’d be likely to enjoy. “Based on positive feedback from customers,” Valve says in the announcement, “Play Next has proved successful enough to graduate from the Lab. With today’s Steam Client update, that functionality is now integrated into the Steam Library.”

The new implementation seems like a more robust and much more convenient way to surface that information – I hope we all spend a lot less time deciding what to play and more time just playing from here.

If you need more to play, we’ve got lists of the best PC games and free Steam games for you to peruse. You know, just in case your backlog wasn’t overwhelming enough just yet.