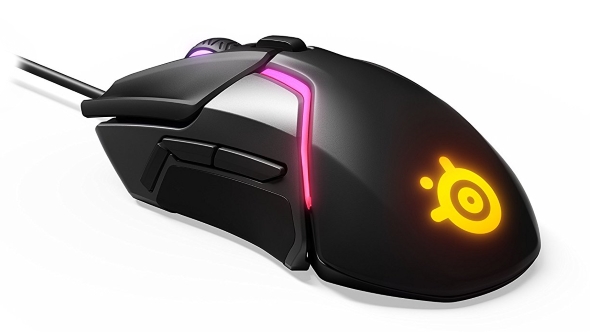 The SteelSeries Rival 600 is the latest high-end gaming mouse from within their design studios. And, while I’m not 100% sure about its claim to being the world’s first true 1 to 1 esports sensor, I’m more intrigued by the fact that it’s made me change my grip from claw to palm. And I don’t even mind.

However you hold your rodent, check out our pick as the best gaming mouse you can buy today.

From a quick glance you could quickly dismiss the Rival 600 as yet another gaming peripheral purely aiming its diodes at the great RGB LED debate. Especially with its more than passing resemblance to the gorgeous Roccat Kone Aimo mouse. But there is far more to the Rival 600 than the matte black (with 16.7 million potential highlights) exterior might suggest.

For a start the Rival 600 is using the PixArt PMW 3360 sensor. Shocking, right? Except they’re kind of not. While Logitech might have some shade to throw about how they’ve been “enabling the gaming industry for years” and how other companies essentially take all the work they’ve done with the optical sensor company and pass it off as their own work, but with a fancy name, SteelSeries are adamant their TrueMove3+ variant isdifferent.

Like Logitech, SteelSeries have been working with PixArt to create their own custom version of the base sensor. They claim it’s been designed specifically to deliver true 1 to 1 tracking, free from the vagaries of mouse acceleration and without any unnecessary jitter being introduced into its movement.

The TrueMove3+ sensor retains the PMW3360’s 12,000DPI max sensitivity, with a maximum speed of 350 inches per second, but it’s not those peak speeds the Rival 600 is really concerned with. It’s about accuracy, and about maintaining it at relatively low levels. No-one really wants to game at 12,000DPI… well, no sane human who isn’t playing on a 16K monitor anyways. It’s about maintaining accuracy of movement at the lower DPI levels, and in that the Rival 600 is marvellously consistent.

It’s also the first gaming mouse I can remember that has dual sensors in its base, with one purely brought into play to deal with the inevitable lift-off that occurs when you’re flinging your mouse about mid-game. When you pick the mouse up off the surface to bring it down somewhere else you will have noticed that your cursor moves around. When you’re in the heat of online battle, where every second counts and accuracy is paramount, not being able to trust where you’re going to end up facing when you lift the mouse up and put it down can be deadly. 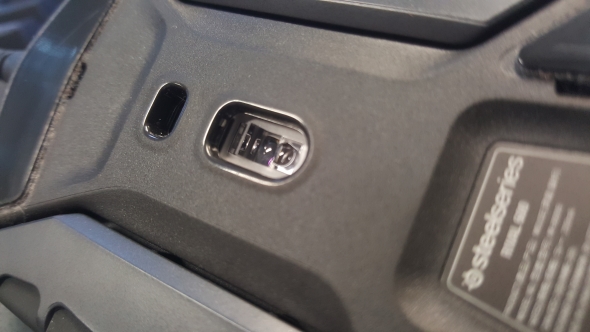 SteelSeries have done a great job in keeping that extraneous movement to a minimum, meaning you won’t find yourself suddenly staring down at your combat boots because you’ve had to shift your gaming rodent about.

Not because I’m not a fan of their design aesthetic – I think the Sensei has one of the best, Intellimouse-aping, designs out there. No, it’s because when I first started using the mouse it just felt far too flat, too low to the desk. That’s because I’m mostly a claw-grip gamer, preferring to hold my mice in my fingertips, but for some reason the Rival 600’s chassis has made me swap to a palm grip. And it’s done so without me even realising.

It’s not that it’s changed how I use other mice, but the comfortable chassis seems to be actively pulling my palm down to it. 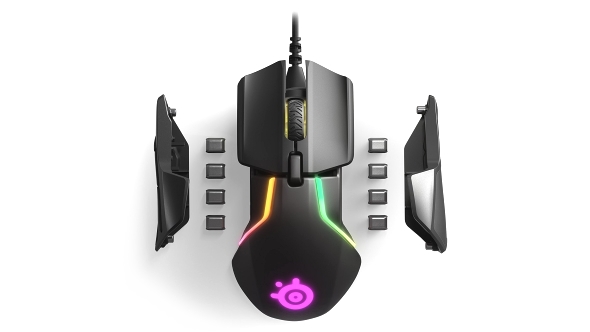 The Rival 600 is reassuringly weighty too. Or not. That depends on your personal taste for mouse heft. The customisable weighting system allows you to change the weight by 32g, with four 4g weights available to be locked into each side of the mouse. That means you can add another third again onto the base weight of the SteelSeries rodent, which can change the feel a great deal.

And yes, you also get lots of customisable RGB LEDs to play around with via the SteelSeries Engine 3 software. There are a surprising number of lighting zones for such a small peripheral. And because it’s a wired mouse there are no energy concerns about having your rodent lit up like a… well… like a modern day gaming mouse. Sigh.

Whether it really is the most accurate mouse on the surface of the planet, and whether they really have made the PixArt PMW3360 sensor completely different with their own work, I can’t really say. What I can say is that it feels easily as accurate as our favourite gaming mouse, the Logitech G903, with its own Logi-designed PixArt PMW3366 sensor.

And that’s high praise indeed for a mouse that’s not as pricey as I was expecting. At $80 (£70) it’s still in the real money section of the peripherals market, but is a way off the price of either the top Logitech G900 or G903 mice. You are, as always, going to have to pay the wireless tax with either of those beauties. But if you’re happy tethered to your gaming PC then SteelSeries Rival 600 is possibly a more comfortable, cheaper, and as – if not more – accurate a mouse.