For the first time in four years, Stellaris has a new ending. The final third of Paradox’s sci-fi grand strategy game had been virtually unchanged since the release of 2017’s Utopia expansion, which offered a one-dimensional path through the later stages of a campaign. No more – Stellaris: Nemesis, the newest add-on for the 4X game, builds on the systems introduced in previous DLC to deliver a new endgame, representing the most relevant and exciting addition to Stellaris in a long time.

Nemesis is themed around a central choice – do you want to save the galaxy, or destroy it? Experienced players will remember the original endgame crises that could trigger, usually involving giant NPC-controlled fleets. Now, a new ascension perk enables factions to instead become the crisis, granting Menace points via offensive actions such as conquering planets, vassalising, and just generally destroying things.

As you accrue more Menace you also gain access to higher crisis perks, ranging from alternative ship types and purge bonuses all the way to the ultimate goal: the galaxy-ending Aetherophasic Engine. This weapon of total destruction (no messing around with puny mass destruction here) eradicates every single star in the galaxy so your species can transcend to another dimension. To do that, you need vast quantities of Dark Matter, which is only obtainable by killing stars.

Killing a star is a process similar to destroying a planet with a Colossus, the key difference being that everything else in the system – friend or foe – gets wiped out in the resulting supernova. Planet killing Star Eaters (and the Aetherophasic Engine) come with beautiful visual effects, burning every single planet to a crisp before breaking it up into chunks. 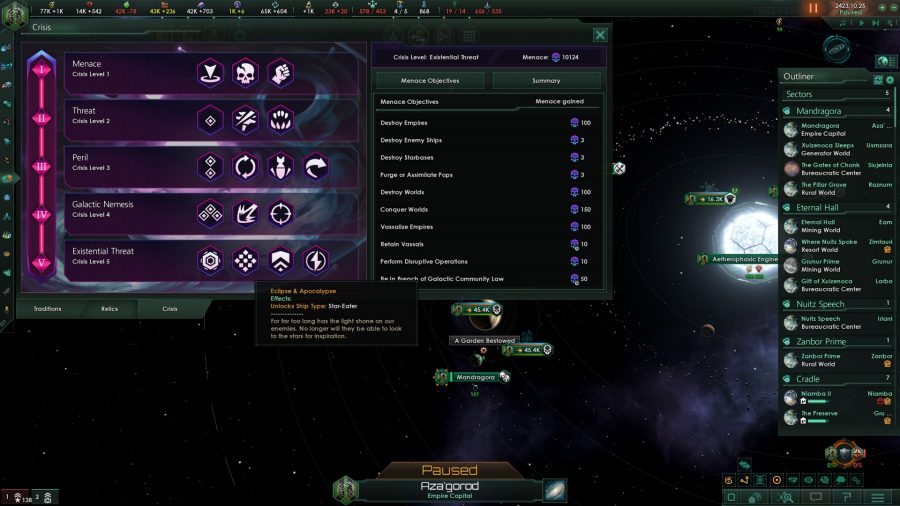 Making these system-view only feels like a missed opportunity as these cataclysmic events could bring some much needed atmosphere to the galaxy map. Destroying stars doesn’t trigger little flickers or mini-supernovas in the galaxy view, nor does the huge spacetime distortion of the dimension-punching engine. The galaxy map still remains static, a tedious representation of what should be a vigorous scene.

If you don’t want to destroy the galaxy, you could try saving it instead. The previous expansion – Federations – introduced the galactic community, a UN-like galactic senate that unites most factions into a single legislative body. Nemesis enables the senate to appoint a galactic custodian, charged with handling major threats and given special powers.

This custodian gets exclusive executive powers such as direct control of a galactic defence fleet and the ability to end a voting session prematurely or stop proposals from reaching the senate floor for a time – unfortunately, there’s no filibuster mechanic. Its mere existence also enables the passing of new resolutions such as the creation of universal trade rules, or a navigational agency that makes interstellar travel faster. 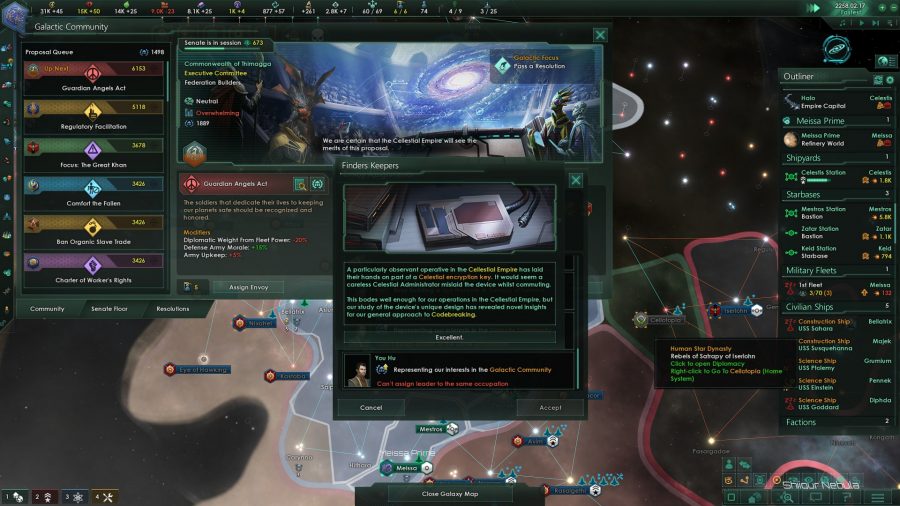 These small additions flesh out Stellaris’s intended illusion of being part of a gigantic bureaucratic body like Star Wars’ Galactic Republic. Like Chancellor Palpatine, custodians can extend their terms or make them permanent before declaring a Galactic Imperium. The proclamation of the Imperium disbands all federations in the galaxy, changes previous structures into imperial-themed variants, and allows the passing of yet more new resolutions.

It’s a huge power play that drives its own expansion thanks to a new civic that massively increases monthly influence and diplomatic weight. This allows the seat of power to pull rank on the rest of the galaxy by quickly colonising systems, passing edicts, and swaying votes in its favour. The path from custodian to emperor feels more thematic than useful – most of the new powers aside from the galactic fleet do little to help combat powerful threats.

What use is the ability to stop a proposal in the senate when a Space Dragon is eating a planet? The real impact comes from the Imperium’s sheer amount of monthly Influence, which overcharges resource generation and logistics via edicts and helps expansion. 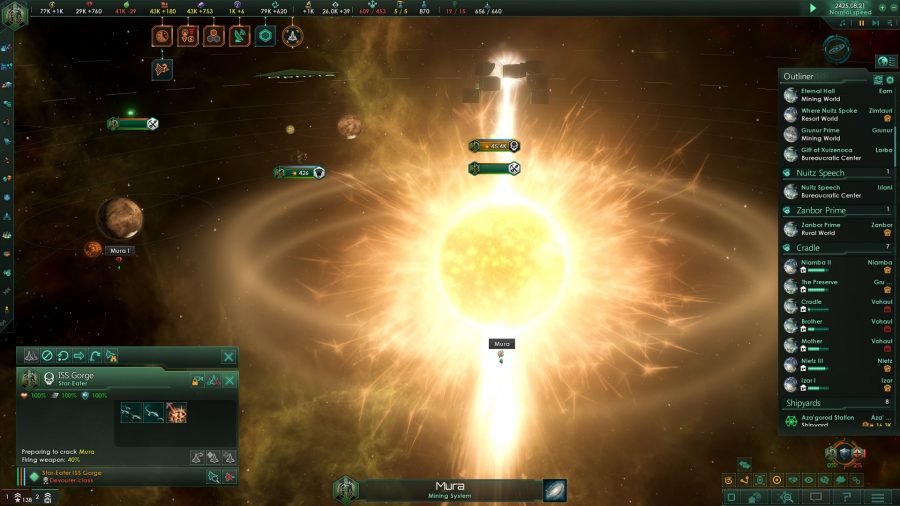 The free 3.0 update allows anyone to send Envoys to build spy networks and gather intel as part of the new espionage mechanics, and Nemesis allows you perform actions with these networks ranging from stealing tech, to rebelling against the Empire by triggering a civil war. Most premium operations are not that different from archaeological anomalies – they offer interesting rewards, but wouldn’t be missed.

The rebellion route is crucial, however – by slowly running operations that reduce authority before triggering a secession, you can split the galaxy into two federations composed of voluntary loyalist and rebel factions. The outcome of this war decides if the galactic community is restored or not, but a white peace simply causes a secession with the rebel systems outside of the Imperium. Nemesis adds a surprising number of outcomes to a game that until this week was bereft of endgame choice. 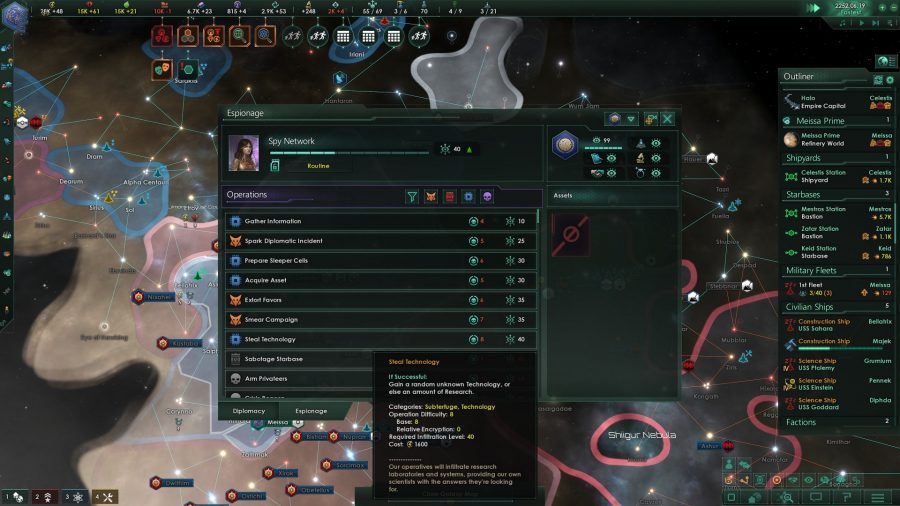 Choices are ultimately what Stellaris: Nemesis comes down to. By allowing players to save the galaxy, destroy it, or rule it, Stellaris finally breaks the late game malaise that’s plagued it for the past four years.

The new choices encourage more long-term strategy and player agency from the early game in order to attain objectives at the end of a campaign, while breathing new life into recently introduced features. Stellaris has long needed a new endgame, and at last, it has one.

Revamps the endgame to give you a lot more choice, and is perhaps the most impactful expansion released in a while.