Welcome to the wonderful world of Stellaris mods. If you thought navigating through all of the Crusader Kings 3 mods was easy, or that the 4,000 or so EU4 mods wasn’t daunting enough, then we’ve got a bigger challenge for you. Stellaris, Paradox’s grand strategy 4X adventure boasts an entire galaxy of over 21,000 modifications. This game seems to lend itself more to user-generated content than its predecessors, both of which are double Stellaris’ age but with far smaller mods scene.

Properly charting a course to the brightest of these luminaries while avoiding wasting one’s time on buggy or bland black holes is essential for anyone wanting to truly expand their Stellaris experience. As we’ve done in other mod recommendations, the mods are generally divided into categories. In this case, we’ve looked at total conversion mods, mechanics mods, ‘immersion’ mods and finally cosmetics.

As usual, most mod choices are subjective so take this guide more as a means of how to search for mods rather than strictly which mods to get although we’ve done our best to look into what some of the current favourites are.

These are the best Stellaris mods:

Let’s take a quick survey of key sectors within the Stellaris mod galaxy. 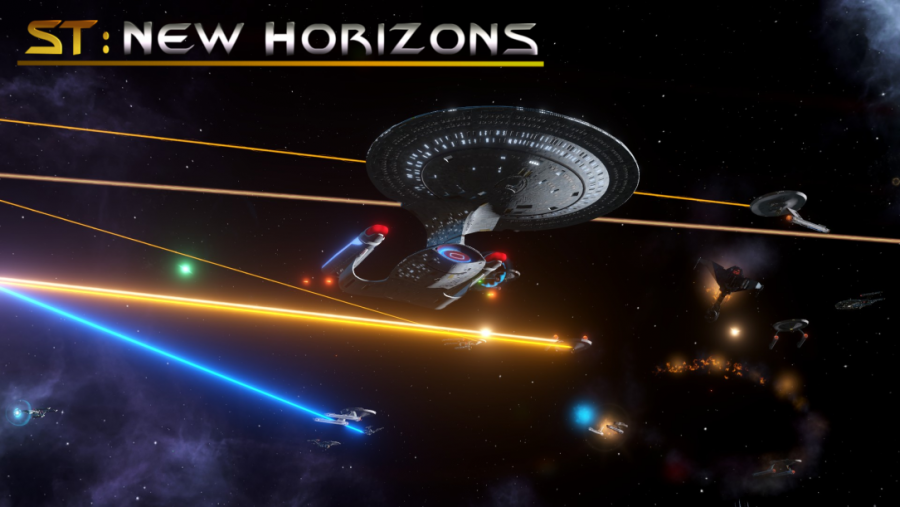 Perhaps the most premier (and by far one of the most popular) mods today is this meticulous and immaculate total conversion of the Star Trek universe into Stellaris. Star Trek: New Horizons contains everything from graphics modifications to a deeply accurate Star Trek galaxy. An entire armada of true-to-canon ships is reproduced complete with modified components to match.

Races, events, and even the User Interface will reflect this complete experience of immersing one’s self into the franchise. Not only are the major races available, but even some of the most remote and obscure empires are ready for the player to take on a galaxy-wide conquest or peaceful cooperation in their own Federation. This is the gold standard in Total Conversions and it’s encouraged to simply read over all of the features on their Paradox forum thread to see how total this mod is. 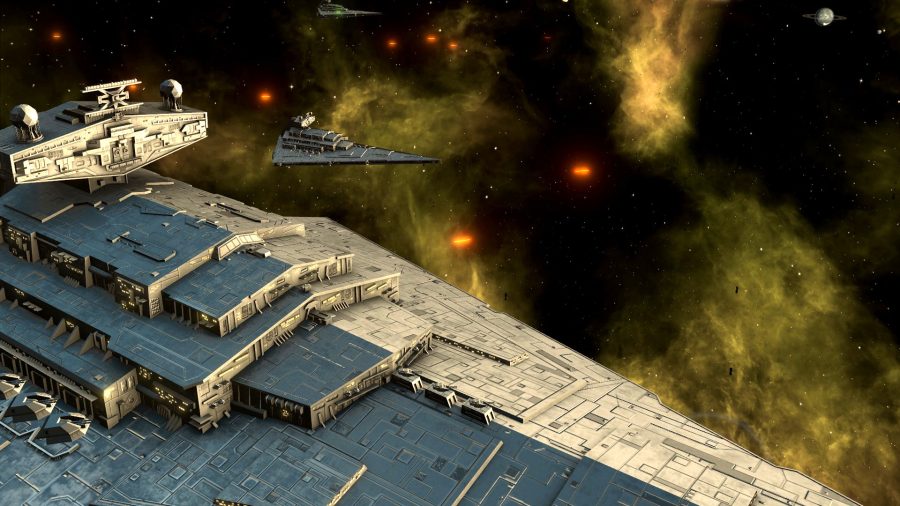 We can’t have a Star Trek mod without throwing some love to Star Wars as well. SW Fallen Republic is an excellent total conversion mod that’s “lore accurate” (although, I don’t know as of what point) and features over 1,300 accurate star systems, over 40 playable factions and 140 ship types from the Star Wars universe.

The team have put in a lot of work make this as authentic a Star Wars experience as they can, even modifying how the hyperlane mechanics work, locking off the unknown regions until you go explore. The Yuuzhan Vong have also been introduced as the end-game crises, which is a lovely stroke. Every strategy game these days seems to have a Star Wars mod, but few are made to this level of quality and detail.

Compatible up to Stellaris 3.0.x 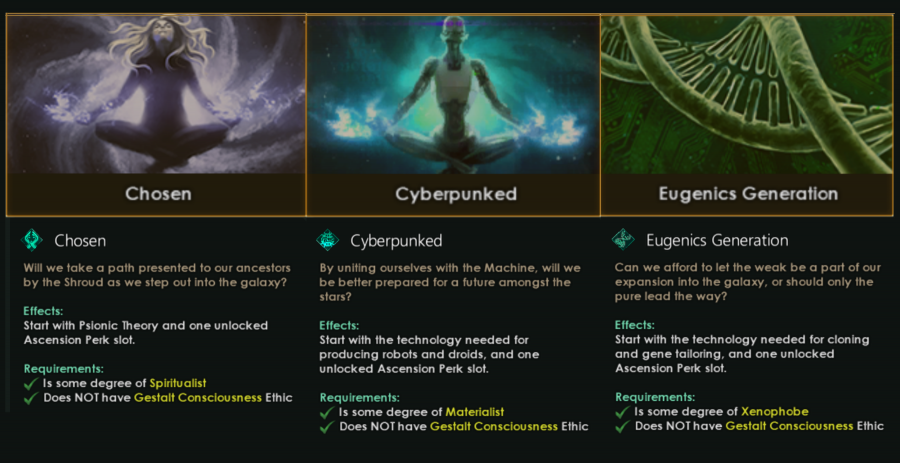 Billing itself as an ‘unofficial expansion’ to Stellaris, this mod seeks to enhance the in-game universe to a whole different level. AlphaMod adds New buildings, mechanics, ship types, components, resources, policies, government types etc. are presented for the player. This is the one stop shop if one wants to remain in the Stellaris universe but not at the base ‘vanilla’ experience.

The benefit of having a complete overhaul mod such as this is that all of the components are guaranteed to work together towards a common and balanced experience. While the latest version is still in the alpha stages (no pun intended), hours and hours of enjoyment can be had on previous patches for Stellaris. Waiting for more features to come online is worth it for a fuller game experience.

Compatible with version 3.0 – there are other mods for earlier versions of the game as well, if you search ‘AlphaMod’. 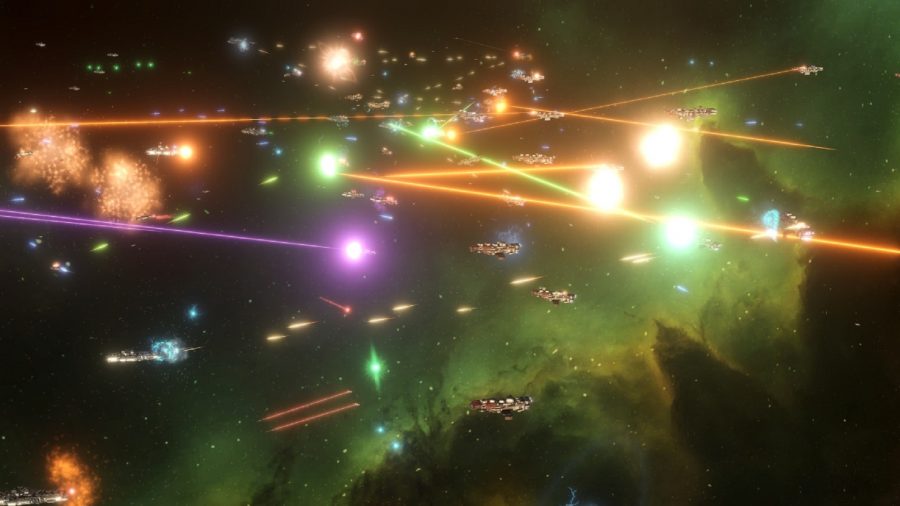 One of the reasons I play space 4X-style games is for the spaceships. I love building them, and I love sending them into battle. If you are like me and also a fan of the space war, then Amazing Space Battles is probably the mod we’ve been looking for.

It mainly focuses on graphics – with new weapon and explosion effects, but it also improves ship behaviour so that overall space combat is a lot more satisfying to watch. Great stuff. 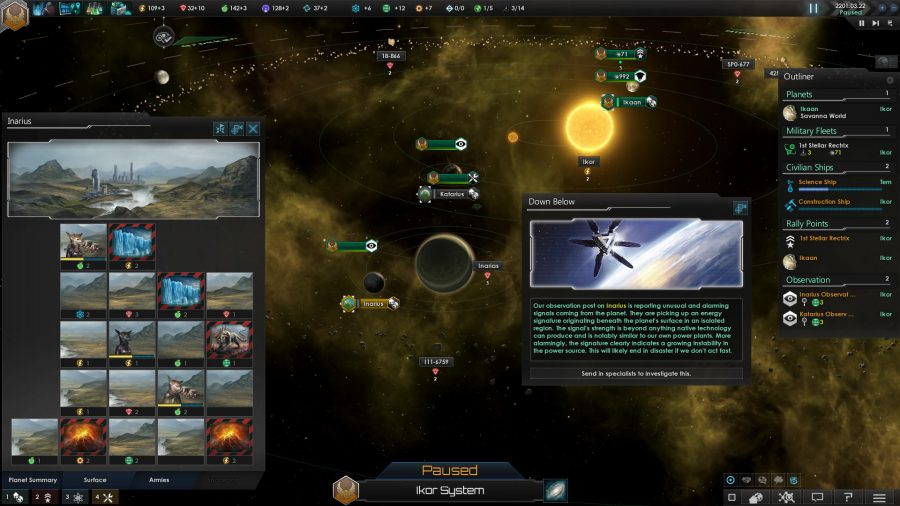 Replacing the previous events based mod – Dynamic Political Events – this new mod serves a similar purpose, but is currently the favourite among the Stellaris community. It adds new anomalies and events to help spice up the mid-game, which is still lacking even after the Nemesis expansion.

It’s worth noting that achievements will be disabled if you use this mod, but at least it’s compatible with the latest version of the game (3.0.x).

From the mind that brought you ‘Alphamod’ comes a quaint little mod that completely spruces up interactions with primitive worlds. From appearing as overbearing gods or faithful guardians, to even sending down mysterious monoliths to guide the flowering ethos of a new civilization (cue Strauss), the Gods & Guardians mod is a perfect little addition to help a player have a bit more fun with this sandbox of a strategy game. Will you institute a Prime Directive or enslave the lesser races? This mod allows you to decide complete with interesting events to guide you.

Compatible with version 3.0 but there are variants for earlier versions. 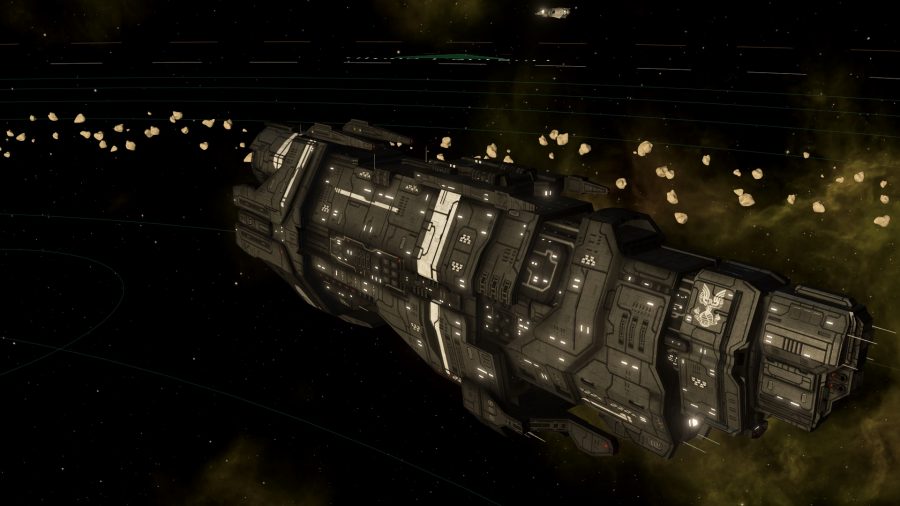 Sins of the Prophets: Stellaris

Our resident strategy expert Joe is a passionate fan of the Halo universe, and you may have heard him talk about a particular mod for space RTS/4X hybrid Sins of a Solar Empire. Titled Sins of the Prophets, it’s an overhaul mod that adds a Halo universe sheen to the game, and the development team behind that mod have created something similar for Stellaris.

SotP: Stellaris is at the time of writing just a ship-skin pack, essentially, but the team have hinted that once the feature set for the game stabilises they might think of doing a more comprehensive overhaul. For now, enjoy taking UNSC or Covenant-themed ships into battle. The team have also added in native support for other popular space combat themed mods.

Fully compatible up to Version 3.0.x

Sometimes what you need is not integrating grandiose change to the mechanics but a simple improvement when it comes to the interface, and UI Overhaul 1080p Plus does exactly that. If you’re running at a higher resolution, this will give you a better, clearer custom ship designer, larger outliner, and using it won’t block achievements. There’s even a version of the mod for the non-Steam version of Stellaris. 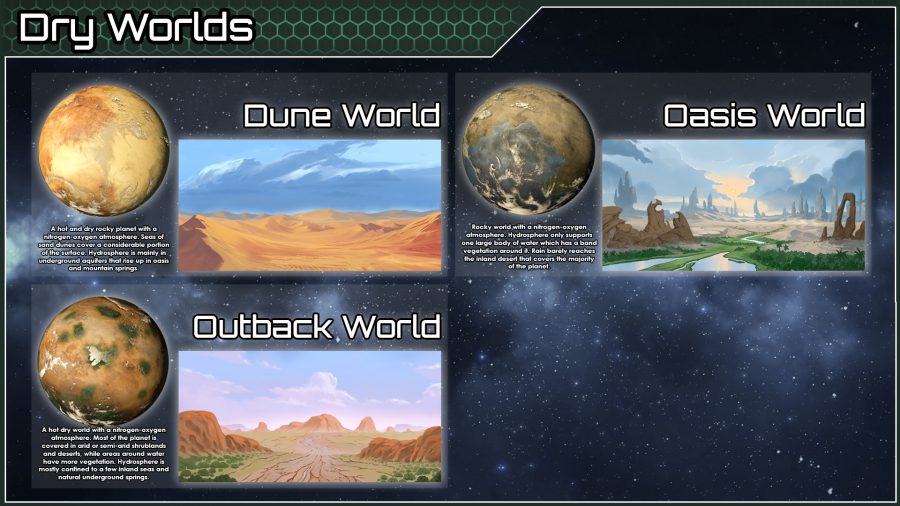 A prime example of cosmetic mods taking on a life of their own. Planetary Diversity seeds the galaxy with thirty new types of planets also brings about sweeping game mechanic changes that touches on other mod genres. This is one visual enhancement that also fundamentally changes how the game is played making this a tour de force of a mod.

Compatible with 3.0.x, but not achievement friendly 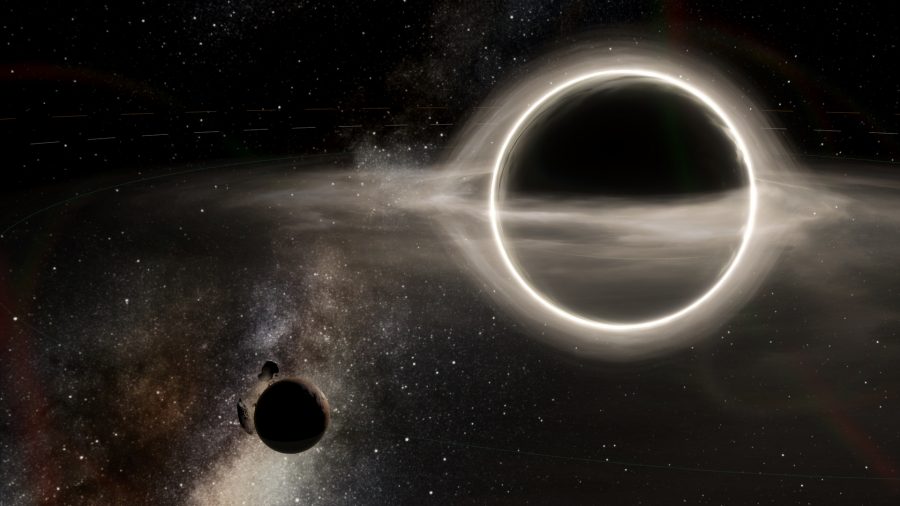 Confirmed compatible up to 3.0.x

From Mass Effect to Dune to Total Annihilation to Half-Life to Star Trek and Star Wars; fictional, historical, and original emblems are now available for your empire. Ironman and multiplayer compatible, this allows a player to add that extra edge of individuality to their game. Grab it here.

HOW TO MOD STELLARIS

For those new to modding, changing the base game has never been easier thanks to the Steam Workshop: simply subscribe to the mod you want and it will automatically be downloaded into the Stellaris launcher. 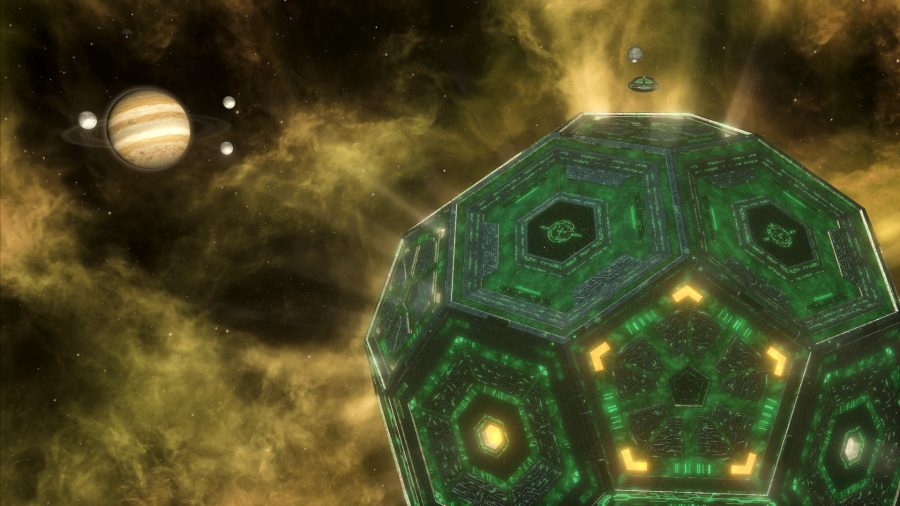 Check if the mod is up to date with the most recent patch for Stellaris. Once a new expansion comes out you may have to wait a few days, weeks, or even months (for bigger mods), until the mod is updated. Also, each mod will tell you on the side menu if it requires certain DLC.

Still want to play that favourite mod of yours but Stellaris’s latest update ruins your save game? You can always roll back your Stellaris version to continue your campaign.

Check if the mods you’ve selected are compatible with the other mods you’ve downloaded. This information is usually found on each mod’s page as they usually list which mods they are able to run with.

For mods too large for Steam, you can usually find their pages on the Paradox Forums and find the instructions on how to install from there. You can also google search large mod Wikis in order to find instructions.