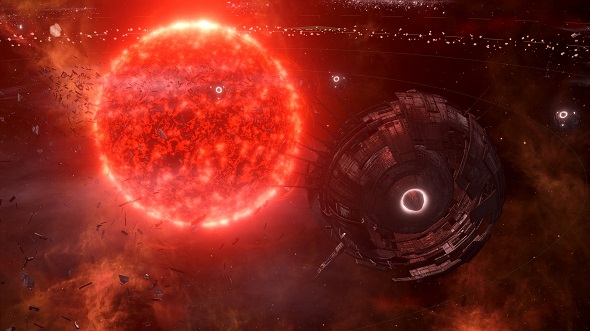 In addition to the new story content and technologies they’ve added for Distant Stars, Paradox have made changes to the way elements of the game work – anomalies, for instance, can appear up to level 10 now, and while any scientist can research them, the differential between a scientist’s level and the anomaly’s level will determine how long the research will take.

For more info on the expansion and latest patch, check out the developer stream below.

Original story, April 23: Nearly two years later, Paradox’s foray into deep space is continuing to push the bounds of the final frontier further and further out. The latest Stellaris expansion is Distant Stars, aiming to give players even more opportunities to seek out strange, new worlds in the dark reaches of space.

Distant Stars is billed as a Story Pack, similar in scope to previous DLC like Leviathans and Synthetic Dawn. This one will add new solar systems with unique stories, as well as their own tech, resources, and planets to colonize. Your scientists will also be confronted with “dozens” of new anomalies and events to work through.

Stellaris is one of the best 4X games on PC. Check out what else made the list.

Even more substantial mysteries await beyond a gateway network leading to a constellation outside your home galaxy, which may be filled with massive, valuable discoveries that await you or untold dangers – it’s tough to tell with extra-galactic relations. Either way, you’ll be racing rival empires to be the first beyond the gate. The biggest additions (literally) are a number of massive space creatures, which will be mightily insistent on their continued existence, even at the expense of yours.