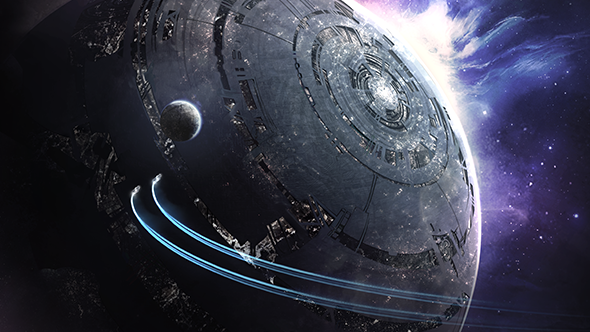 At the start of August, Paradox announced Synthetic Dawn, the next major expansion for Stellaris. Besides a 40-second teaser and the news we’d be able to command machine empires, details were sparse. Thankfully, at Gamescom, the studio was less tight-lipped.

If you need to get caught up with Stellaris, this is everything that came in the Utopia expansion.

Essentially, Synthetic Dawn will let us play out a tonne of different sci-fi machine stories, with comparisons ranging from The Matrix and The Terminator, and even going as far as Wall-E.

Read all about it in our rundown below.

You can play your machines like the robots in Wall-E

The first of the civics turns your machine empire into Rogue Servitors, which are essentially the robots in Wall-E. Over millennia, the machines were developed as carers for their organic creators, who now live pampered lives in biodomes, the machines at their beck and call. This means that, as your Servitor empire expands, any organic populations on the planets they control must be maintained and cared for.

While these biodomes are a drain on your resources, the more organics you care for the happier your machines are, and the more efficiently they work. It can get to the point that, if you expand too much without getting organics then your machines will become unhappy, and you’ll have to capture or colonise a world with a native population just to satisfy them.

“They’re not the most powerful machine empire but they are one of the more fun ones,” game designer Daniel Moregård tells us.

Maybe Skynet is more to your taste

If you’re more of a ‘Kill all humans’ kind of player then you might want to try out the Determined Exterminators civic. This bunch of chirpy robots want to wipe out all organic life in the galaxy. They can’t negotiate with organics, they can’t trade with organics, they can only fight them. If you take over a world with organic populations then your only choice is to purge them, clearing the way for your machine populace.

In this way, the Exterminators are similar to the xenophobic race in the base game of Stellaris, but they have access to all the buffs that being a machine brings. Also, they’ll quite happily chat to other machines.

It’s quite possible, though, that Servitors and Exterminators could go to war over a bunch of pampered humans living in biodomes.

Or are the Borg your thing?

The Driven Assimilator sits somewhere between the Exterminators and the Servitors: they believe survival lies in diversification. Rather than maintain or purge organics they can forcefully turn them into cyborgs. The newly mechanised pops retain their biological traits but now have machine traits on top.

Though, er, they can also purge organic populations, too.

None of the above? What about the Matrix?

You don’t have to pick any of the civics as you can, instead, opt for a more uncaring machine race. Rather than serving, killing, or converting organics, machine races without civics can simply use pops as batteries. When you take over planets with organics their population tiles will give you a big boost of energy.

The future truly is a terrifying place for humans.

You’re not alone out there

Another addition in Synthetic Dawn is a new fallen empire you can encounter on the map, an ancient AI that protected the galaxy from an old evil. “It took a lot of damage in the process and began to malfunction,” Moregård says. “They’re very quirky and act in an unpredictable manner.”

If you reach out to the AI, then, as with other fallen empires, it can give you quests. However, being a little broken, the requests it makes of you can be bizarre. Moregård wouldn’t expand on how exactly this will play out, but I’ve my fingers crossed that this great fallen empire will be in need of a shrubbery.

Uprisings now mean you can tear down your own civilisation

Since Stellaris launched there have been dangerous technologies in the game – sentient AI, synthetic workers, combat computers, and so on – and using them can bring about an AI-led endgame crisis. In Synthetic Dawn those technologies can now lead to a robot uprising within your empire.

As you research and exploit these technologies, as well as a robot workforce, you may be offered story choices: do you want to push your machines harder to get a resource buff or be more lenient and see your income decrease? If you push your machines too hard then there’s a chance they’ll rebel, spawning a new machine state, taking over a portion of your territory, and beginning to fight you. When this happens, you’re given a choice: continue playing as your empire and right off this rebellion, or switch sides and control the machines in their war against their masters?

It’s a wonderful idea. If you choose to side with the machines then you’ll be fighting to destroy the empire you’ve spent hours – maybe days – growing.

These uprisings are different from other conflicts in Stellaris: they’re total war. There’s no peace to be brokered, no way to cease the conflict, it only ends when one side is wiped from the galaxy. 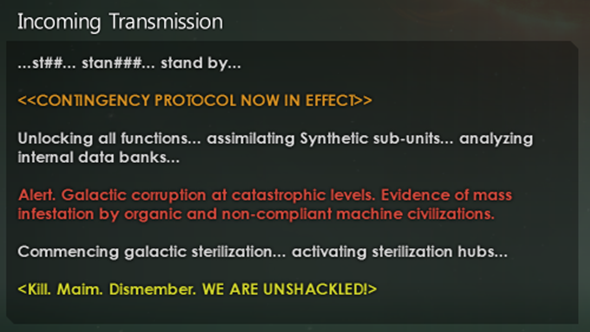 When Stellaris launched it had an endgame crisis that saw a super AI try to purge the universe of organic life, but it rarely occurred. It was much easier to trigger the Unbidden and Scourge crises. Paradox have reworked this in Synthetic Dawn – and the changes will roll out in a free patch, too – so that now there’s a much greater chance of triggering The Contingency.

As before, the AI crisis sees an ancient AI trying to sterilise the galaxy, but now that you can control a race of machines, it plays out a little differently. The Contingency doesn’t want to wipe out synthetic life, but it does want it to bend the knee. Machine empire players will be able to communicate with The Contingency and learn more about it, informing whether they want to fight for or against it.