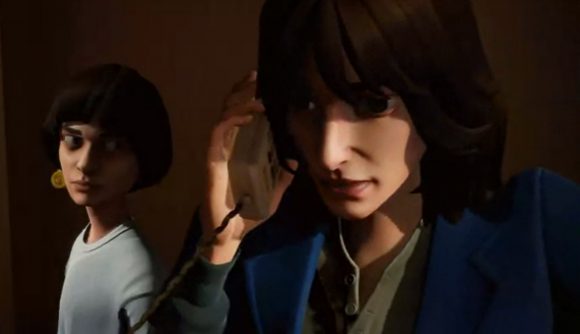 September 24, 2018 More footage from the cancelled Telltale Stranger Things is out there, including an encounter with the Demogorgon.

Telltale Games has laid off 90% of its employees as the studio winds down to fully shut down. In addition to the roughly 250 employees left jobless as a result – certainly the most important part of the story – there are now several announced games that will never see the light of day. One of those titles was to be a Stranger Things adaptation, and we’ve got just a hint of what that might’ve looked like thanks to some leaked footage – plus more bits and pieces of the game keep pouring in.

A word of warning, though – we have no idea where this footage came from or if it’s legitimate. It made the rounds on Reddit and 4chan earlier today after a number of Telltale devs started to share studio stories and unfinished footage on social media. It looks far too elaborate for a fan-made mock-up, but still take it with a grain of salt.

The first video we saw video shows Will walking down a hallway as Joyce chats with Dr. Owens on the phone – which would’ve put the series sometime after season two of the show. The player gets control of Will just as the video ends, leaving you to explore the Byers home. The art and animation very much fit the Telltale mold, though it has to be said that this development build features some intense, soul-searing eyes.

Another clip shows Will rifling through some drawers, while still another keeps the 80s nostalgia alive with a guest appearance from a TRS-80. These new bits of footage come via Reddit, though again we don’t have an original source for them.

That’s all in keeping with the Telltale style, though things seem different in the Upside Down. Not only do we get a look at the Demogorgon, it appears these segments take place entirely in first-person for a proper horror vibe as you search for hiding spots.

News of Telltale’s shutdown came last week. You can follow that link for a more detailed breakdown of what happened, but according to some reports Telltale’s deal with Netflix fell through, dropping the final straw on the back of an overextended studio. The last remaining portion of Telltale is finishing up work with Netflix on the Minecraft adaptation, but it seems the streaming giant is still looking to make a Stranger Things game happen.

“We are saddened by news about Telltale Games,” Netflix tells Polygon in a statement. “They developed many great games in the past and left an indelible mark in the industry. Minecraft: Story Mode is still moving forward as planned. We are in the process of evaluating other options for bringing the Stranger Things universe to life in an interactive medium.”