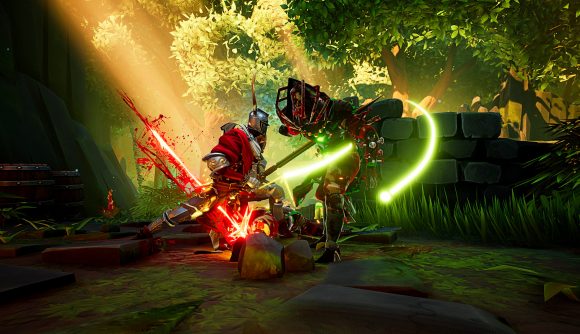 Publisher 505 Games has released a new combat trailer for the upcoming fantasy action RPG Stray Blade from developer Point Blank Games. Stray Blade takes place in the colourful lands of Acrea, centering around soulslike action which the devs mysteriously describe as “the high noon of melee weapon combat.” It boasts a variety of weapon types including sword and shield, lance, mace, dual wielded daggers, and more available to wield against your foes.

The combat looks to feature a system of enemy attack anticipation and dodging that should feel familiar to any soulslike fans, with players able to roll and sidestep to deftly avoid incoming blows. Combat footage shows off parrying and blocking too, as well as some rather flashy special moves and finishers. Careful exploration will also give players access to secret passages around the map and, in true Metroidvania fashion, abilities unlocked as the game progresses will allow for additional exploration in previously visited areas.

This latest trailer also introduces a furry friend – the Xhinnon wolf companion Boji. Boji is a handy little fellow who can pounce onto enemies to distract and disable them, fire off ranged arcane blasts, and even revive the player should you take a fatal blow during combat. His powers will increase as your bond with Boji improves.

Point Blank Games also promises that Stray Blade will place an emphasis on the changes players bring to the world, and that taking certain actions in game may lead to even greater challenges. They add that time in Acrea keeps moving forward even when you die, which may present unique circumstances to be dealt with down the line depending upon how your journey plays out.

Stray Blade is currently set for a 2022 release, but registration for the private beta is now available on the 505 Games website if you want to get an early taste.

In the meantime, we’ve got the best soulslike games on PC and best PC RPGs for you to peruse to satisfy those needs.