Styx! He’s a master of shadows, a jack of all shades, a little goblin man who runs up walls and pilfers things and stabs men in their necks. Styx is to Garrett what Shrek is to Lord of the Rings, a more buffoonish take on the stealth genre that, despite its fantasy spin, shares more than just an armrest with the likes of the upcoming Thief. These guys are pretty much sitting in the same chair, with Styx on Garrett’s lap, if you want to fill out the metaphor. Because he’s a goblin, after all.

Cyanide’s Styx: Master of Shadows plays like a more pared down, purer kind of puzzle stealth game than the cinematic, AAA tit-blaster Thief, with “vertiginous” levels set in city-sized fortifications built up around a monolithic, life-giving tree. These levels naturally give way to platforms of varying altitude, around which Styx must navigate without being spotted by guards. Combat is largely a no-no, with the 200 year old goblin easily smitten by any human guard who happens to catch him, so instead you employ a range of classic stealth manoeuvres to outflank and outwit the AI patrols. 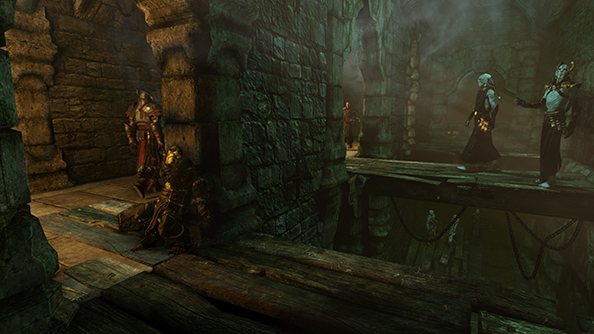 You can snuff lights, briefly turn invisible using limited mana (amber, in the game’s tree-centric mythology), assassinate using dual daggers in a pinch, and, perhaps most interestingly, conjure up a clone of yourself with which you can distract and lure away guards. This clone has a range of functions: he can leap on to guards’ backs to blind them while you sneak your true form past; he can slip through small gaps to access switches that must be pulled simultaneously; he can even explode into a noxious cloud to create a smokescreen for Styx to slip through.

The idea, I think, is to snatch as much loot as possible en route to your goal in a given mission. Challenge modes push you to replay levels within a set of criteria, such as not being spotted, murdering everybody or stealing everything that’s not nailed down. There’s certainly less loot and fewer ashtrays than in Thief, but it’s more strategically and deliberately placed here. Every coin is a challenge. 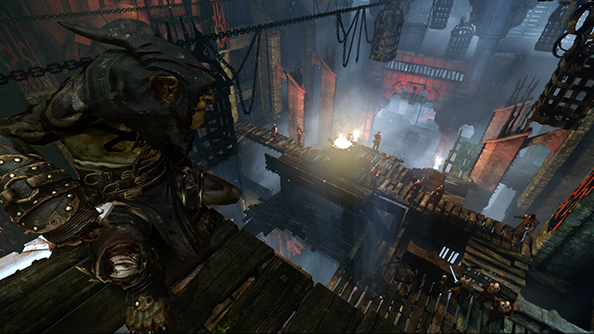 The game’s focused level design and rules-abiding, exploitable AI seems to lend itself to a thoughtful approach to carrying out missions. Guards come with buddies and raise an alarm if they go missing, so it’s necessary to thoroughly avoid or incapacitate both, rather than leave just one standing. And gutsy players who attempt to slip through levels entirely undetected will have the challenge ratcheted in retaliation as some mission elements, such as ringing a giant bell to summon the elevator you need, will recall all of the guards you left untouched to investigate.

The brief demo ran through a cast of characters who’ll crop up later in the game too: elves and elite units immune to specific kinds of attack, skittering, blind spiders who’ll dash en masse towards any sound they hear, huge orcs. Each enemy type distorts slightly the understood behaviour of guards, requiring to think laterally and utilise the full breadth of Styx’s abilities to progress. It’s one of those games that never forgets to be a game and do gamey things, which is lovely.

Yes, Styx looks unpretentious and trimmed of any superfluous design elements that don’t serve the very basic function of an enjoyable and intelligent stealth game. It’s due for release in Autumn of 2014, and it will probably be good.